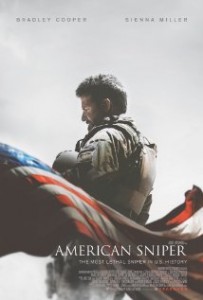 American Sniper tells the story of Chris Kyle (played by a substantially beefed-up Bradley Cooper), at 160 recorded kills, the deadliest sniper in the long military history of the United States. I’m not up on sniper score cards, but that certainly sounds like a lot of blood and brains. Through four tours of duty in Iraq Kyle bravely protects his own in unbelievably tense and hostile situations.

Early in the film there is a scene from his childhood where Kyle and his younger brother are receiving a lecture from their father after the younger boy was beat up by a bully. Dad explains that there are three types of people in the world: sheep (the vulnerable, weak herd), wolves (the predators of the sheep), and sheepdogs, those who protect the innocent sheep from the evil wolves. Dad intones that the Kyle boys better be sheepdogs. Chris’s piercing gaze makes clear that he gets it.

Fastforward twenty years and Kyle has signed up to become a Navy Seal in the wake of 9/11. He is a natural at what he does, and Clint Eastwood (the director) handles the fog of war with a steady hand. While I don’t think American Sniper quite matches Hurt Locker for nail-biting tension, it is nonetheless an excellent and powerfully shot war film. The evacuation in the sandstorm in particular was a masterful sequence of ordered chaos.

It also has that “oorah!” bravado that leaves the gun-loving man’s man sitting a little higher in his pickup as he leaves the theater. Score one for the sheepdogs.

But that brings us to the difficult question. Is Kyle a sheepdog? By one definition he is. After all, he bravely serves his country and protects his fellow soldiers. On that count, he has my respect. Thrown into the same situations he endured, most people (myself included) would curl up in the fetal position and await their fate.

However, there is a larger perspective that complicates things substantially. What were the American soldiers doing in Iraq in the first place? A friend of mine stated the tension well after the movie by harkening back to Red Dawn. In that movie (let’s stick with the 1984 original rather than the remake) the USSR invades the United States. In response, a group of brave young American men engage in Guerrilla warfare against the foreign occupiers to take back their land. They fancy themselves the sheepdogs, and they certainly look like it. By contrast, the Soviet invaders are obviously the wolves. Obviously.

Now switch “USSR” with “USA” and American Guerrillas with Iraqi Guerrillas. On Red Dawn: Iraq Edition who is the sheepdog and who is the wolf? Depends who you ask.

In favor of American soldiers as sheepdogs, one can point to the fact that some of the Iraqi Guerrillas commit moral atrocities along the way, not least of which is the infamous “Butcher” that Kyle is determined to take down. However, some of the American occupiers commit moral atrocities along the way too. Some of those folk were soldiers (remember Abu Ghraib, for example, and the litany of actions chronicled in the recent CIA torture report), but not all were. Think as well of the disastrous presence of western mercenaries like Blackwater at the Nisour Square Massacre.

After you begin tallying the results, you might come to the conclusion that Mr. Kyle’s simple division of the world into three groups is a little bit too simple. Indeed, “little bit” is probably grossly understated. In particular, the line between “wolf” and “sheepdog” isn’t nearly as obvious as one might think. It isn’t merely that one might not know which of the two one is at a given moment. The deeper reality is that one might be both at the same time.

As regards Kyle himself, the issue is complicated further by the fact that a court ruled last year that Kyle fabricated a slanderous story about Jesse Ventura in his bestselling autobiography. In other words, while he is a brave war hero, he has also been recognized to be a liar.

And this brings me back to the director, Clint Eastwood. Twenty years ago, Eastwood directed the masterful Unforgiven which explored the moral ambiguity of real life as it firmly deconstructed the classic western. The moral complexity is captured in that immortal line: “It’s a hell of a thing, killin’ a man”:

American Sniper agrees. It is a hell of a thing, killin’ a man. And the film ably depicts the impact of war and killing on Kyle. (Perhaps most notable — and laudable — is the unflinching way the film depicts the impossible decisions Kyle has to make that involve children. These painful scenes are well done.)

At the same time, the film never turns to consider the deeper moral questions. The “oorah” and nationalism of American Sniper seem to have washed out the deeper hues of moral ambiguity that made Unforgiven such an important film. This is unfortunate because in our world of growing polarization we need less oorah and more Unforgiven.