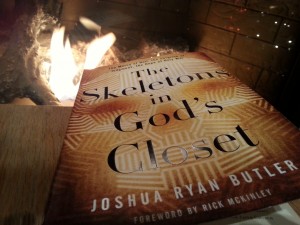 Joshua Ryan Butler. The Skeletons in God’s Closet: The Mercy of Hell, the Surprise of Judgment, the Hope of Holy War. Thomas Nelson, 2014.

This is part 2 of my review of The Skeletons in God’s Closet. For part 1, click here.

The second section of the book turns to the topic of judgment and it begins with another revealing vignette. As Butler recalls:

“Shortly after I began following Jesus, a friend explained, ‘Christians go to heaven; non-Christians go to hell.’ He wanted to make sure I understood my marching orders. ‘So our job is to get as many people as possible to become Christians before it’s too late.’ I wanted to be open to new ideas, but I had a few major problems with this one right off the bat.

Jeremiah, as we come to learn, was a Native American who wanted nothing to do with Christianity. According to the simple framework offered by Butler’s friend, that means he’s headed for hell. The problem, as Butler knew, was that Jeremiah had good reasons for being against Christianity. After all, Christians were the ones who forcibly removed him from his family, forcibly circumcised him, cut out his grandfather’s tongue, raped him, and murdered his fiancée. If folks like that were your only ambassadors for the faith, chances are you’d share Jeremiah’s sentiments.

“The Christians in Jeremiah’s life may have more to deal with than they bargained for–in the very God they proclaimed.

In other words, the judge is coming for you, so-called “Christians”, you kidnappers, abusers, rapists and murderers. So y’all better get ready for the coming King.

God’s judgment is good news because it will unveil the deception of appearances (114). I am reminded here of a great passage in Harry Blamires’ book The Christian Mind where he paints the picture of a judge who has sat in the bench for forty years sentencing people for their crimes. However, because of the blackness of his own heart, that judge is the most sinful man ever to enter that courtroom. God’s judgment will reveal the blackened hearts of judges and pastors, CEOs and presidents, lawyers and doctors (and perhaps even the occasional televangelist).

Judgment also reveals the bondage of all creation and the violence of human history (115-17). Have you ever noticed that bookstores commonly group books on history and war together? Tells us something about the human condition, doesn’t it? God hears the violence of history, as Butler explains:

“Death steals Abel’s cries from Cain’s ears. His brother’s eyes are closed. And his voice is silent.

“But for God, the effect is the opposite. God hears Abel’s blood crying out from the ground. Death does not silence Abel’s voice, it amplifies it. The same grave that removes Abel’s cries from Cain’s ears, amplifies them in the presence of God.

Butler responds by pointing out that “Jesus finds faith in unexpected places” (124), like a Roman centurion who shows great faith even as he represents the pagan oppressors of the Jews. Butler goes on to highlight the expansive nature of salvation in scripture as that which reaches out to encompass every nation, tribe and tongue.

From there Butler continues to develop the theme of coming judgment for the visible church even as Jesus identifies with the poor, oppressed and disenfranchised. Along the way he makes many wry observations like the following:

“Many people are stalking Jesus. They have intellectual knowledge about Jesus, but not relational knowledge. They may have theology degrees, know Greek words, and be able to wax eloquent on the ‘trinitarian perichoresis of the eschatological parousia.’ But do they know Jesus? That is the real question.” (155)

And what about those of other religious faiths? Butler takes on this question in chapter 11. His comments on Buddhism provide a good summary:

“God is for the Buddhist […] But there are central aspects of Buddhism that must, by their very nature, be checked at the door.”

Butler then notes that the same lesson applies to those who lack formal religion but who are nonetheless guided by other ideological commitments:

“Where I live [Portland, Oregon], being considered ‘good’ has little to nothing to do with institutional religion. The social benchmarks for moral applause have more to do with whether one eats organic, rides his or her bike to work, and supports a humanitarian initiative in Africa.” (179)

God is for the secular, Pacific North West granola cruncher as surely as he is for the Tibetan Buddhist and the Tennessee Baptist. And in each case that means that both judgment and grace are extended to us in the midst of our misdirected pursuits.

I resonate with this second section of the book. In my book You’re not as Crazy as I Think I contrast two responses to the Rwandan genocide: Christian pastor Elizaphan Ntakirutimana participated in the genocide by betraying Christian Tutsis who sought his help. Meanwhile Muslim Mbaye Diagne, a captain from the Senegalese army working with UNAMIR (the UN peacekeepers in Rwanda) risked his own life daily to rescue Tutsis from the slaughter. If you were going to stand before God’s throne of judgment with the legacy of “Christian” Ntakirutimana or the Muslim Diagne, which would you rather be?