Before I continue, let me note that I like Oprah. In a world of increasingly nasty, polarized people, she appears to be a genuinely kind person who has done a lot of good in the world.

My biggest problem with Oprah is that her view of ultimate reality seems to consist of a Hallmark spirituality that melds catchphrases from coffee mugs and inspirational posters with the latest tidbits from Wayne Dyer and the Dalai Lama into one satisfyingly sweet and innocuously inspirational whole.

And now Rob Bell has joined the team.

As the clip opens, Oprah starts off with a pointed question: “What is the soul?”

Oprah: “Your definition of God?”

Rob: “Like a song you hear in another room and you think ‘boy that sounds beautiful but I only can hear a little bit.’ So you start opening doors and rearranging furniture ’cause you have to get in that room to hear that song. When you get in you find the knobs and you turn them all to the right cause you’re like ‘I gotta hear more of that.’ And you open the windows because…”

Rob then kept talking about moving furniture and opening windows while I sipped my camomile tea (the official beverage of Super Soul Sunday). 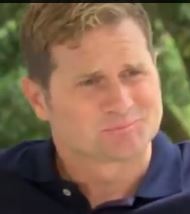 When Rob had finally completed his effusive expostulation on “God” he paused with a truly awesome look of self-satisfied ‘Wow, that was profound, wasn’t it?” In other words, it was this look:

As the interview progressed, Oprah then asked Rob to complete a series of sentences including this one: “Heaven is…”

Rob replied, “… here and now and then and there…”

I can understand why somebody might think heaven is here and now if they’re lounging on a patio beside the sea, chatting things up with a media mogul like Oprah.

But I suspect that definition will be harder to accept for some other folks, like frontline caregivers working with Ebola patients in Sierra Leone or refugees fleeing the advancing ISIS front.

As her last question, Oprah invited Rob to complete this sentence: “My favorite thing to do on Sunday morning is…”

We all know what the right answer is. Dressing up in uncomfortable, formal clothing, sitting beside strange people on hard wooden benches, singing songs, listening to a monologue at the front of the room, and then paying for it all with 10% of your income.

But Rob’s too honest for that. Instead, he replied: “um, my thirteen year old son and I will often go surfing.”

Just as I was getting ready to complete my article with an indignant “Farewell Rob Bell” (John Piper’s tweet heard around the world, or at least around the world of tweeting North American evangelicals), I looked up from my word processor and saw again for the first time an inspirational poster that hangs on my wall: a black background, a single candle, and the simple yet profound caption: “Don’t curse the darkness. Light a candle.”

Suddenly, the thought occurred to me. Rather than curse Rob Bell’s feel good spirituality, perhaps I too ought to give it a try. After all, surfing on a Sunday morning does sound pretty good.

What is more, if I reinvent myself as an inspirational purveyor of feel-good gobbledygook, I might actually end up selling some books and making some money. Okay, I’m going to give this racket a try.

But where to begin? As I thought about it, the answer became obvious. I should try this Rob Bell thing with my own Oprah interview. So here it is, my abbreviated Soul Sunday interview with Oprah followed by Rob’s original interview. Let me know what you think. Could I also have a second career as a peddler of nebulous inspiration?

While I think my gobbledygook is a match for Rob’s, he definitely trumps me with his serene facial expressions. Watch and be amazed.