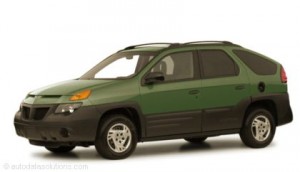 The Pontiac Aztek is widely recognized to be one of the great design failures in automotive history. It represented the disastrous results when function steamrolls form and no attention is given to aesthetic appeal or organic unity. Bob Lutz, the renown automobile executive, came to work at GM after the Aztek debacle. In this recent interview he muses on the car:

“One guy I informally interviewed about how the Aztek happened was one of the top guys on the project. And this guy, he looks at me and he says, “I’m proud of it.” Proud of the Aztek? “Yup. That was the best program we ever did at GM. We made all our internal goals, we made the timing, and I’m really proud of the part I played in it.” He had tears in his eyes. It was almost tragic. Everybody wanted to will this thing to succeed, and it didn’t work. All the emotional commitment and pride in the program was that it achieved all its internal objectives. And it was probably one of the great defeats in his life, or in his career.” (Source)

The simple lesson is that (most) people do not want to climb behind the wheel of cars that are butt ugly. Of course not every car is going to be the Alfa Romeo 8C Competizione, but when you’re designing an automobile you can’t just pay attention to a list of metrics like gas mileage, drag coefficient and leg room. Be warned, if you fail to take a step back and consider how it all holds together, you too could end up with an Aztek.

The same is true in religion. A powerful religious system is not merely one that meets a list of isolated metrics, but one that cultivates the aesthetics of sacred space. I recently came across a great example of this while reading Peter Hitchens (the Christian brother of Christopher) describing the mesmerizing experience of church when he was growing up:

“I had experienced the intense beauty of the ancient Anglican chants , spiraling up into chilly stone vaults at Evensong. This sunset ceremony is the very heart of English Christianity. The prehistoric, mysterious poetry of the Nunc Dimittis, perhaps a melancholy evening hymn, and the cold, ancient laments and curses of the Psalms, as the unique slow dusk of England gathers outside and inside the echoing, haunted, impossibly old building are extraordinarily potent. If you welcome them, they have an astonishing power to reassure and comfort. If you suspect or mistrust them, they will alarm and repel you like a strong and unwanted magic, something to flee from before it takes hold.” (The Rage Against God.)

Notice how liturgy (song, silence, prayer, order of service), architecture, and the gathering twilight all combine in Hitchens’ reminiscence to create a complete transcendent aesthetic experience that he recalls vividly a half century later. That’s the power of religion cultivated with attention to the organically unified aesthetic experience.

In contrast, I fear that many expressions of North American evangelical Protestantism (my neck of the ecclesial woods) are more like the Aztek. Those of us on the inside view the church the same way that automotive designer viewed his work on the Aztek. And all the while we don’t realize we are cultivating expressions of Christian religion that may score well on a limited list of metrics, even as they have lost that transcendent élan vital that pulsed through the Evensong service of Hitchens’ youth.