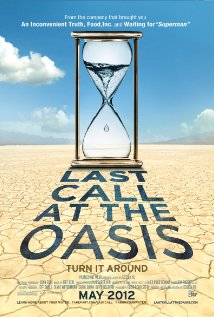 The other day I watched the documentary “Last Call at the Oasis,” a sobering look at the growing water crisis. One of the topics the documentary takes on is the growing need to recycle sewage water. Apparently the technology to turn water that was once the conduit for urine and faeces back into something good to drink has existed for more than forty years. We need only sell people on the idea.

I agree that at first blush the thought is disturbing. One scene in the film shows the water at a sewage treatment facility in New York. Multiple used condoms can be seen bobbing on the sewage froth. (Yes, apparently some New Yorkers are prone to flush their condoms.) The thought that this might end up as a cup of drinking water is disturbing indeed.

At one point in the documentary a psychologist takes a dead cockroach and dips it into a cup of otherwise clean drinking water. He then observes that nobody will want to drink that water (unless they’re on “Fear Factor” or undergoing fraternity initiation) because it has been tainted. It doesn’t matter what one does to purify the water. In our minds it still bears the taint.

Of course, this is an irrational response given that we can know that scientists have means of removing all the impurities (pee, poo, and condoms included). But still that yuck factor remains.

As I mulled this over I thought about how many other ick factors we have eventually grown used to. I’m staying in a hotel room right now, even though I know that there is probably e. coli on the faucet and salmonella on the T.V. control. I eat a hamburger even though, according to Eric Schlosser’s Fast Food Nation, there is about a 70% chance that some cow feces made it into the patty. Last night I swam in the hotel pool even though it is only marginally cleaner than the water at that New York sewage treatment facility.

Time and again we’ve gotten over the ick factor through gradual desensitization and with the knowledge that failure to do so could turn us into obsessive compulsive recluses. And who wants to be a recluse?

So is it time to get over the ick of recycled drinking water?

Check out this clip from the documentary: