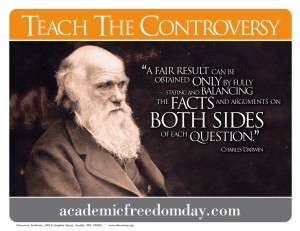 You probably know this phrase as the clever marketing strategy of The Discovery Institute. Right in the upper echelons of marketing slogans, alongside DeBeers’ “A diamond is forever” and Nike’s “Just do it!” we have Discovery Institute’s “Teach the controversy”, a clever plea for open-mindedness and free inquiry as a way to bring intelligent design into the science classroom.

As you can guess, evangelical churches have gotten behind the slogan. They enthusiastically intone that we must “teach the controversy”.

Just so long as “the controversy” is understood to be intelligent design and evolution.

Apparently the marketing isn’t meant to extend to other controversies. Like biblical inerrancy. Or the nature of hell. Or gay marriage. Or, for that matter, the meaning of Genesis 1-2.

But I say, if you’re going to buy into the marketing, go all in.

Charity, they say, begins at home. Good advice does as well.

So don’t ask others to teach any controversies unless you’re willing to teach your own.