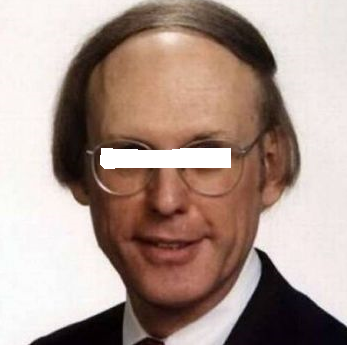 Men who are follicly challenged deal with their plight in different ways. Some shave their heads. Others wear hats. And still others engage in the lamentable practice of the comb-over.

You know what I’m talking about: the practice of growing a portion of hair extra long in a vain attempt to comb it over and mask — or at least minimize — the effects of baldness.

According to the Wikipedia article on comb-overs, in Japan the men who engage in the practice are called “barcode men” due to the resemblance between the comb-over and a barcode. In other words, the general population isn’t being fooled. Indeed, I would venture to say that nobody in the history of the universe has ever been fooled by a comb-over. All a comb-over says to the world is: Look at the poor way I am dealing with baldness!

Even worse, when comb-overs go awry, disaster can quickly ensue. Some years ago I was at a medical conference (I was studying bioethics at the time). Near the front of the lecture theater sat a doctor with a truly stunning comb-over. Apparently he wasn’t taking any risks, and so he had plastered it into place with half a jar of brylcreem. I couldn’t help but notice — it looked like a piece of greasy carpet sitting precariously on his bald dome — when suddenly he turned his head abruptly and the lid flipped over and began bobbing on the side of his head like a mud flap on a semi. I attempted to avert my eyes from the sorry scene, but the comb-over continued to bob on the side of his head for the remainder of the lecture.

So here’s a rather glaring question: how could a highly educated medical professional be so irrational, so bungled in his own self-perception, so askew in his perception of others, that he would engage such a maladroit solution to male-pattern baldness?

The problem isn’t just with balding men, of course. Indeed, human beings generally are very unreliable in their self-perception. Rumor has it that 90% of people think they are smarter, more attractive, and more charismatic than the average. And we all regularly exercise our confirmation biases and motivated reasoning to secure our self-imposed delusions are maintained as long as possible.

So what of it?

Consider the irrationality that motivates the comb-over a loose thread that is connected to the whole integrity of a garment. Pull on the thread and the garment itself threatens to unravel. Of what do I speak? The Christian conception of the fall envisions human beings as sinful, corrupt, and deeply askew in self-delusion. It also obliges them to know enough to know that they need help and to seek it. But if intelligent human beings can be as irrational and self-deluded as this medical doctor then can we trust them to make the right decisions as to their own sinfulness and their need for redemption? And if not, can it be right to allow people to be damned who were, from the get-go, so deluded in their self-perception that they would think a comb-over makes any sense? Might the road to hell be paved with the irrational delusion that motivates the comb-over?