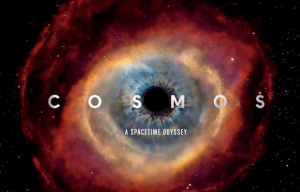 On Sunday night, 34 years after the debut of the immortal Carl Sagan miniseries “Cosmos” on PBS, viewers were treated to the first episode of the new miniseries “Cosmos: A Spacetime Odyssey” with Neil deGrasse Tyson.

The program began with Tyson speaking on the same rocky coastline from which Sagan had initiated the first “Cosmos” series all those years before. And then, over the next hour (including enormously disruptive commercial breaks; if there is any program that shouldn’t have commercial interruptions, surely it is this one) we were taken on a quick tour of the universe to prepare us for the wonders to come.

Our vessel of the imagination is a funky chrome-colored and cuttlebone shaped spaceship. As I watched I wondered, why that shape? My best speculation: it echoes the shape of the arrowhead, among the earliest remnants of human civilization. In a matter of fifty thousand years we’ve gone from chipping arrowheads to hurtling among the stars (in this case the stars of our imagination).

One segment takes an animated journey back to the late sixteenth century period when Giordano Bruno developed his controversial ideas about the cosmos being of infinite size and filled with planets with other civilizations. Bruno was ultimately martyred for his many aberrant theological, philosophical and scientific beliefs, including these beliefs in the universe. The stylish animation ends with the embers from the pyre on which Bruno was burnt flittering up into the heavens and disappearing among the stars. For those keen to read history in terms of the still popular 19th century warfare model of Draper and White, they’ll find ammunition here. However, the sober historian will recognize that the reality of history is far more complex. After all, Thomas Aquinas (among many others) courted the possibility of other civilizations on other planets in the universe all without controversy. One must attend to the unique forces of retrenchment and conservatism in the late sixteenth century to explain Bruno’s martyrdom. Sadly, those interested in perpetuating the warfare model tend to have little patience for nuanced historical reconstruction.

The most magisterial segment consists of Tyson reducing the 13.7 billion year history of the universe to a single “Cosmic year”. On that time scale the Milky Way appears in mid-march, the sun in late August, and human beings in the final countdown on new year’s eve. I am reminded here of Mark Twain’s famous Eiffel Tower illustration (if cosmic history is the Eiffel Tower, the time that human beings have been around is the depth of the skin of paint covering the final pinnacle). The cosmic year is an effective illustration, made all the more so by the seamless use of digital animation.

The episode is full of cleverly crafted scenes. In one of them, we see a chaotic jumble of asteroids in the early Solar System. Tyson points out that one asteroid comes just close enough to another to send it on a new trajectory. But why does he bother to mention this? We find out later in the program when we discover that this chance encounter led to this asteroid becoming the meteorite that hurtles into the surface of earth, initiating the mass extinction that took out the dinosaur and cleared the way for lowly mammals like ourselves. Tyson draws a philosophical lesson, noting that this points to the “radical contingency” of events in the cosmos. Given that Tyson is outspoken in his own atheism, I know that he means here bottom to top metaphysical contingency, i.e. that there is no divine mind superintending the contingent events of the cosmos. But of course this is completely underdetermined by the evidence. The datum says nothing about whether God exists or not, though admittedly the program doesn’t go so far as to suggest otherwise. Regardless, it is a well done scene.

Tyson saved the best for last. The episode ends with him back on the same rocky coastline holding a journal from 1974-5. He explains that it was Sagan’s journal, and he opens it up to a day on which Sagan had written that he was expecting a visit from a young man named Neil deGrasse Tyson. Tyson explains that he was seventeen at the time and took the train up to Ithaca, New York where Sagan lived to visit with him for the day. Sagan’s famous hospitality was well on display that day and cemented in Tyson the conviction that he too wanted to become an astronomer some day. And now, thirty-four years later he has come to be hosting the new “Cosmos”. In the midst of a universe the scale of which utterly transcends our understanding, the most profound moment of our tour came here, on this rocky coastline in Tyson’s touching recollection of human connection, set against the vastness of the cosmos.