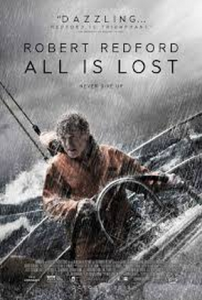 What is it that leads people to weigh anchor and journey out onto the vastness of the open ocean in a tiny vessel, in search of nothing more than an adventure? This is a behavior I’ve never understood. And having watched “All is Lost” I can now say that my intuitions are thoroughly vindicated. This is a harrowing film to watch, the most claustrophobic, confining film that I’ve seen since the under-rated “Buried” (a film that takes place entirely in a coffin; see my review here). In this case, the coffin is replaced by a medium sized skiff. The sailor (he is never named) wakes from slumber and realizes things have taken a turn for the worst. The film follows the sailor over the next week as his world begins to shrink and life becomes increasingly perilous.

The sailor is played by Robert Redford in a bravura performance that would surely have been celebrated in most any year. (I’m tempted to say Redford’s was a bravura performance for a man his age. And so it is. But the demands of this film would test the mettle of most any actor, of that I’m sure.) Alas, 2013 was an outstanding year for film, and it seems that “All is Lost” never quite garnered the spotlight it well deserved. Riveting, with a script that consists of no more than one paragraph of dialogue in the whole film. (A lesser film might have tacked on a voice over narration. Thank goodness “All is Lost” isn’t a lesser film.)

Is all really lost? Does the sailor go down with his ship? Or does he live to a see another day? Once again, a lesser film would have tied up loose ends. But “All is Lost” ends in a delicious and well deserved ambiguity. If the sailor at sea is a metaphor for life — and why not? — then the ambiguity is but one more nod to the human predicament itself. In that sense we’re all at sea. Is all lost? Time will tell.