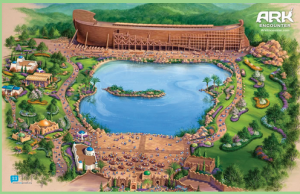 Ken Ham, that Australian-accented l’enfant terrible of North American fundamentalist Protestant 6-day young earth creationist Christianity, has achieved his goal of raising the first $14 million to begin construction on an ambitious life-size replica of Noah’s Ark for the people of Kentucky and indeed the citizens of the world.

(Whew! That’s quite the opening sentence!)

The total projected cost of $73 million might seem like a lot. But remember, the Sochi Winter Olympics cost a cool $50 billion. Ham’s ark is a bargain by comparison.

Despite this, the liberal Huffington Post has seen fit to offer a holier-than-thou critique titled “5 Things Kentucky Could Spend $73 Million On Instead Of A Fake Noah’s Ark“. And what are these things, you ask? Oh, you know, boring stuff like “feeding hungry children” and “investing in broken schools” and “saving abused animals.”

Here’s the real irony. These holier-than-thou liberals are always preaching that the burning of fossil fuels will spur global warming, melt the polar ice caps, and turn planet earth into water world. So when the flood waters start rolling across the African savannah, where do the liberals propose to put all the giraffes, elephants and hippos?

Yes folks, Ken Ham is not only constructing a monument to the misbegotten piety of North American fundamentalists, but along the way he is offering the only real solution to save the animals of planet earth from a watery grave. A mere $73 million to have a kitschy tourist trap destination and a backup plan to prevent the next mass extinction?