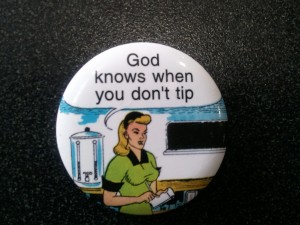 Christopher Hitchens famously (or infamously) objected to divine providence because the idea of God, by his estimation, was akin to that of a despot cruelly tracking every action of the beleaguered citizenry. The comparison Hitchens drew was with North Korea. Had he lived long enough, he might have substituted the NSA.

Today I was shopping in the Hope Mission Thrift Store with my daughter when she discovered this little treasure, a button (presumably to be worn by service personnel) which impugns the thriftiness of everyone who neglects to provide an adequately generous tip to their server.

“God knows when you don’t tip”

The button reminded me of a bohemian coffee shop in North Vancouver (Bean around the world) which I frequented in the late 1990s that had a tip bowl which cheekily declared “Karma bowl”. In other words, if you don’t tip in this life, you might end up being reincarnated as a gopher in the next.

This button approaches the same issue from a broadly theistic (if not Christian) perspective: God will punish the skinflint and reward the generous tipper.

The idea is presumably not that you tip merely to get a divine reward. (That would be a crass interpretation, evacuating the button of any serious moral content.) Instead, the button is a reminder that the kind of person who is rewarded in eternity is the one who freely gives in this life. (Going to eat a patty melt at Denny’s for lunch? Better be prepared to support the serving staff because the universe is structured in such a way that the generous tipper is the kind of person who will be duly rewarded!)

This kind of divinely providential monitoring, so it seems to me, is not something to be reviled or feared as Hitchens was wont to do. Rather, it is a reminder of a benefit of providence: that this universe is such that the God who created and sustains it all also cares about the flourishing of the poor and disenfranchised folks who make and serve you that patty melt.

And that, it seems to me, is a pretty cool universe.