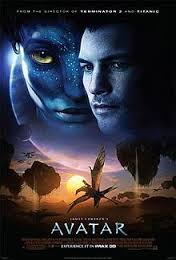 Note: this review was originally published at The Christian Post in December, 2009.

I’ve seen some great films in the last few months (e.g. “The Road,” “Paranormal Activity”) but nothing I’ve seen on a big or small screen prepared me for “Avatar”. This is not a movie, it is an event. My only request: see it in 3-D.If you’re like me, you are a skeptic of 3-D technology. It’s gimmicky, it washes out the colors and blurs the picture. But not “Avatar”. Here the 3-D is seamlessly interwoven with the film and every color and line remains crisp and clear. Brilliantly done.

The story is, in certain respect, fairly conventional: Disney’s “Pochahontas” on steroids. In essence, earthlings are planning to mine the planet Pandora (an Edenic paradise, albeit with a healthy dose of natural evil, particularly in the form of some pretty frightening carnivores). While we’re on the topic of evil, there’s a-plenty displayed in the earthlings’ destructive pillaging of Pandora for the investors of a faceless corporation. Anyways, the love an earthling discovers for an alien and her culture messes things up.

As the Native American storyteller says, “I don’t know if it happened this way or not, but I know this story is true.” Watching “Avatar” I was impacted by how true it is. The obsessive search for the valuable mineral on Pandora reminded me of the destructive pillaging of Northern Alberta’s oil sands. The attempted relocation of Pandora’s native Na’vi people in order to begin the mining operation reminded me of the UK government’s evil deportation of the native population of Diego Garcia to make way for a US military base. And the whole military operation with a thinly veiled rationale recalled to mind the recent invasion of Iraq (as Alan Greenspan recently admitted, it’s about the oil, stupid). (Lest the viewer miss the allusion, the film makes the link with Iraq rather obvious with a reference to “shock and awe”.)

In short this is an invaluable tract for our times. And that’s just the tip of the iceberg (clever reference to “Titanic” eh?): there are numerous themes to unpack: militarism, nationalism, environmentalism, racism, speciesism, and the complex interrelationship of science, religion, and the grinding pragmatism of entrepreneurial capitalism (the best discussion since “Contact”).

What is more, there is some tantalizing theology thrown in. Is “Avatar” offering a new version of the “Gaia hypothesis”? Is Jake Sully a Christ figure, coming from above to become Na’vi and save the people and their world? Discuss.

There is also some intriguing metaphysics. [warning: a modest spoiler ahead] In the end the human Jake Sully opts to continue life in his alien avatar body while leaving his human body behind. What sort of metaphysic of the human person is this? Either it suggests to me a substance dualism where the soul can be attached to various bodies or, more likely, a view where the human person consists of information which can simply be downloaded to various hard-drives (e.g. Sully’s human or avatar body). (This reminded me of Frank Tipler’s wackily wonderful  book The Physics of Immortality, albeit on a much more modest scale.)

In the end the runner-up star in the film is the technology of the 22nd century. It is great to see some of the ideas of future technology that Cameron explored in his masterpiece “Aliens” coming into fruition here.

But the star of the film is undoubtedly “Pandora” itself. The creatures are brilliant in their other-worldly weirdness; the jungle, with its dense foliage and phosphorescent night-time dreamscapes, is mesmerizing; the trees that make the General Sherman sequoia look like a sapling are simply dazzling; and the floating mountains? Well let me just say that if you thought Wyoming’s Tetons are beautiful, you really must check out Cameron’s visions. After twelve years, Canadian director James Cameron is still king of the world.