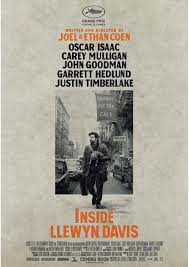 If you ever try the nordic treat salmiakki you will not soon forget it. It looks like regular licorice. But a bite quickly reveals an uber-salty, piercing flavor that will open up the salivary floodgates whilst placing you on the precipice of the gag reflex.

“Inside Llewyn Davis” is like that. This latest offering from the brilliant Coen brothers is liable to overwhelm the unexpecting film-goer with the astringence of Llewyn’s bitter character and endless bad luck. In that respect, the film is rather like the main protagonist: eminently capable but so dark and brooding that it is fated to the periphery of the cineplex just as Llewyn Davis is fated to the periphery of the record store.

The year is 1961, New York. Llewyn (played by Oscar Issac) is a poverty-stricken folk singer who sleeps on a different couch every night as he wanders New York playing gigs, borrowing money, and attempting to wring some royalties for his album out of his manager (ever try to get blood from a stone?).

The one bright spot in the whole movie occurs during a studio session where Llewyn is invited to record with his friend Jim (Justin Timberlake) on Jim’s new novelty song “Please Mr. Kennedy”. The song, told from the perspective of an astronaut reluctant to be sent into space, is raucous good fun.

The rest of the movie, it must be said, is not raucous good fun. And not all licorice is sweet.

On a whim Llewyn hitches a ride to Chicago in the hopes of being signed by producer Bud Grossman (F. Murray Abraham). Grossman invites him to play a song. In a Hollywood film, this is supposed to be the payoff moment. Things will finally turn around for Llewyn, right? So he plays a heartbreaking tale about King Henry VIII’s wife Jane Seymour who died shortly after giving birth to Henry’s male heir. Llewyn finishes the song. There is a thoughtful pause. And then Grossman replies (and I paraphrase): “Not a lot of money in that.”

And that’s it. Back to New York. Back to sleeping on random couches,  playing gigs, borrowing money and waiting for those royalties to arrive.

As a writer, I can relate to Llewyn. I’d like to think of my writing as a creative product akin to Llewyn’s melancholy folk songs. And I’ve heard more than once from editors and agents there is not a lot of money in a particular book or idea (an analysis that is almost always confirmed in sales that never materialize). The only difference is that unlike Llewyn, I’ve got a day job. So I can sleep on my own couch.

The romantic hope remains that Llewyn’s struggles will eventually result in a musical legacy of heartfelt songs beloved by generations. The likelihood beckons that those struggles will merely consume the artist, resulting in a guitar in a pawnshop window and an embittered soul once again sailing for the merchant marines.

This Christmas season, bypass the massive cineplex with the bright lights, bustle, and endless showings of “The Hobbit” and “Anchorman 2”, and find a small arthouse theater showing “Inside Llewyn Davis”. Like salmiakki, it’s a taste with acquiring.