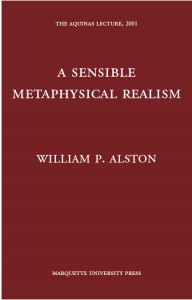 Unfortunately, when it comes to philosophy, common sense almost always takes a backseat to self-confessed Copernican revolutions. As such, William Alston’s 2001 Aquinas Lecture at Marquette University, titled A Sensible Metaphysical Realism, might seem to have the deck stacked against it. But Alston’s work is none the easier for being “sensible” as he has undertaken the bold task of mediating between two of the most polarized positions in all of contemporary philosophy: realism and antirealism. There have been other notable attempts to mediate this standoff, but these efforts have typically been rejected as antirealism by another name (Putnam’s internal realism, for example). Though Alston also seeks a mediation of the two, he grants “much more than half the loaf” (58) to the realist. But then, granting even a few slices to the antirealist is sure to raise more than a few realist eyebrows.

Of course, there are many types of realism. Alston is concerned with defending “a denial of the view that whatever there is, is constituted, at least in part, by our cognitive relations thereto, by the ways we conceptualize or construe it, by the language we use to talk about it or the theoretical scheme we use to think of it” (8). Hence, he rejects the view that “whatever there is, exists and is what it is only within a certain way of ‘describing’ or ‘conceptualizing’ what there is” (9). Many realists have dismissed the antirealist claim to the dependence of reality on cognition as unintelligible, but Alston cautions that if this is true, then the realist’s denial of such cognitive dependence is likewise unintelligible. 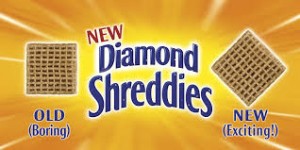 As noted above, Alston’s position is distinctive because of the few slices of reality he grants the antirealist. In short, he contends that some entities and facts may be constitutively dependent upon our conceptual and theoretical choices. Hence, we need to identify putative candidates for conceptual relativity. Alston provides a number of examples which, he argues, represent two (or more) equally legitimate ways to organize theoretically a given subject matter, thus allowing for a contained conceptual relativity. For instance, he suggests that it may be true, relative to one conceptual scheme but not another, that propositions are possible worlds. “The nature and individuation of propositions and beliefs do not confront us as something ready made, whatever our concepts and theories” (17). And so, our theoretical choices constitute propositions. Alston also grants the nod to mereological sums, the theory of temporal parts, and (most surprisingly) even the competing theories of substance and process metaphysics.

This method is, as Alston recognizes, a difficult and messy one, for it requires us to engage in the laborious task of assessing whether innumerable different facts and entities might be plausible candidates for relativity. By contrast, it would be much simpler to opt for one of the traditional options by either denying any conceptual relativity, or absolutizing it (though as noted above Alston shows why the latter is unworkable). Further, Alston must guard against an “ontological explosion” that would arise if he were forced to admit a whole range of dubious entities into his ontology. (Here the example Alston uses is Ernest Sosa’s fanciful “snowdiscall,” an entity composed of snow which is shaped anywhere between a sphere and disc.) Avoiding such an explosion requires us to consider carefully which entities impress us as having a “strong purchase on reality” (38).

Though I remain skeptical of some of Alston’s examples, such as the relativity of substance versus process metaphysics, the strength of the position lies in the openness to limited relativity, rather than in establishing particular instances of it. The main point, as I see it, is that realism is under no threat per se from limited conceptual relativity. Alston has also provided a great deal of clarity toward understanding the antirealist position which has been too readily dismissed by many realists as absurd. One reason is the assumption that the antirealist posits a causal dependence of reality on the mind; at this point Alston’s distinction between causal and constitutive dependence is most helpful. As an aside, while his treatment of unqualified conceptual relativity (for example, Putnam) is effective, I was left wondering how he would interact with Davidson’s and Rorty’s rejections of conceptual schemes. Regardless, this little book may offer the most successful mediation of these two highly polarized positions yet on offer, and, as such, could very well warrant the accolade of heralding a sensible Copernican revolution.

This review was originally published in Philosophia Christi (albeit without the “Shreddies” image).

[Note: “Shreddies” are a cereal sold in Canada and the UK. In 2007 a Canadian marketing campaign was launched in which the traditional woven wheat squares were re-envisioned as “diamonds”. I bet William Alston (1921-2009) would have bought a box.]