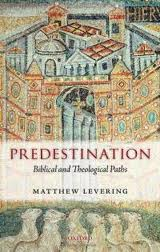 In recent years the perennial debate over predestination has moved centre stage in North American Protestantism with the rise of the so-called “New Calvinism”. Unfortunately that debate is typically restricted to the relatively narrow dogmatic confines of Calvinism vs. Arminianism. This makes Matthew Levering’s Predestination: Biblical and Theological Paths, a book conversant with the whole Christian tradition, both timely and refreshing.

In his introduction Levering lays out the core problem:

“If God permits some rational creatures to be ultimately lost … can predestination be upheld while also affirming that God’s love from eternity for each and every rational creature is unrestricted and superabundant?” (7)

The book contemplates this and other questions in a chronological progression with sixteen interlocutors over five chapters. Each chapter is devoted to a different period: Biblical (chapter one), Patristic (chapter two), Medieval (chapter three), Reformation (chapter four), and Twentieth Century (chapter five).

The sixteen interlocutors represent five different positions on election. To begin with there are those who explain predestination in terms of human self-determination. This group is represented by John of Damascus, John Eriugena, William of Ockham, and Luis de Molina. The second group emphasizes God’s determining role in predestination but attributes the decree of reprobation to divine permission. This view is represented by Augustine, Boethius, and Aquinas. The third position, represented by John Calvin, affirms that God’s active predestination extends not only to election but to reprobation as well. The fourth position, represented in Catherine of Siena and Francis de Sales, eschews systematic attempts to resolve the tension by invoking paradox. Finally, the fifth position proposes that election to salvation ultimately extends to all. This position is represented by Origen, Bulgakov, Barth and Balthasar.

After completing this historical survey of sixteen interlocutors over five chapters Levering devotes the final chapter to defending the paradoxical position represented by Catherine and Francis in which God’s unqualified love for every creature and the fact that his purposes are not thwarted are both affirmed along with the recognition that some creatures will rebel eternally.

Levering offers a fine survey of the biblical and theological material and his five positions provide a helpful way of ordering the landscape. However, the choice of sixteen interlocutors becomes a bit overwhelming. I would have preferred one (or at most two) representatives of each position.

I was also doubtful that the difference between the permissive reprobation view of Augustine, Boethius and Aquinas and the active reprobation view of Calvin was sufficient to warrant placing the latter in a separate category. (Perhaps more importantly, I remain doubtful about the coherence of simultaneously affirming God as primary cause of human action whilst attributing human sin to divine permission.)

This brings me to Levering’s defence of the paradoxical position represented by Catherine and Francis. In the final chapter he helpfully summarizes the centrality of election in Christ, the love of God for all creatures, and the divine permission (rather than causation) of evil and rebellion. This is all well and good, but I find Levering’s claim that the invocation of paradox is the best way to retain these desiderata to be unpersuasive. If God truly loves all his creatures and his purposes in divine election cannot be thwarted (184-5), how could it be that all creatures are not elected? While the paradox position claims that we cannot see how these claims could all be true, I am inclined to conclude that we can see they can’t all be true, in which case invoking paradox constitutes little more than a failure of systematizing nerve.

Regardless, these are minor quibbles. Whatever the success of the appeal to paradox, this much is clear: Predestination is a welcome contribution to the current debates over predestination and it amply displays biblical, theological and historical clarity and competence. I strongly recommend the book and encourage readers to request it for their school libraries not least to speed the release of a more economical paperback.