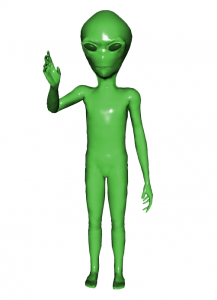 Last night I was out with a friend when he reported a strange occurrence. The previous night, he said, he’d been asleep when he felt and heard a thump on the pillow beside him. He got up (it was 3:44 am) and saw the large scientific calculator that he’d left on the dresser more than 6 feet away, lying on the pillow beside him. Immediately he looked for the family cat but could not find the animal in the room. And regardless, it appeared to strain credulity to think that somehow the cat could have propelled the calculator more than six feet across the room and onto his pillow.

Jokingly, I laid out his options:

As we prepared to go our separate ways I suggested he contact me the next day to give me an update on any further paranormal happenings. He agreed.

So this afternoon I received the following text:

Immediately my heart sank and I texted back:

“So now you’re suffering memory loss? Things are worse than I thought!”

Systematic memory loss can only mean one thing: aliens.

Okay, this isn’t just a (mildly) amusing anecdote. There is a lesson here.

I think of the 2012 independent film “Safety not Guaranteed”. In the film a character decides to travel back in time to save a woman who died. A reporter who investigates based on an ad the would-be time traveler runs in the paper follows up on the woman he said died. And lo and behold, she discovers this woman living in another city. When she confronts the would-be time traveler, she expects him to admit his dishonesty. Instead, he responds with elation, noting that he must have succeeded in the future in travelling back in time and saving the young woman’s life.

As with so many things in life, it’s all how you choose to interpret events.