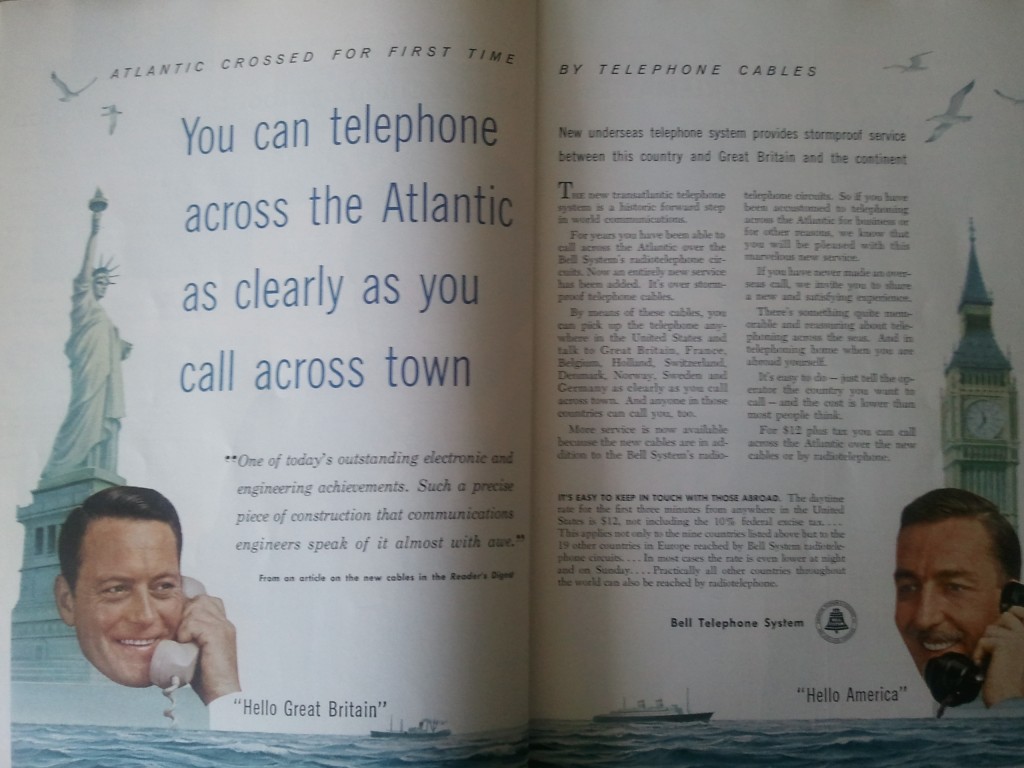 I came home the other day to discover a new yellow phone book had been left on my front step. Immediately it went into the recycling bin. Who uses phone books anymore? Not me.

The really interesting thing is not simply that technology is advancing and the world is changing at such a ferocious pace, but that we lose touch so quickly with how things once were.

Remember when phone booths were on every second corner? When really rich people had actual phones in their car?!

If you want to put things in some real perspective, take a look at this advertisement from one of my 1950s National Geographic magazines. The ad is for Bell Telephone Systems and it is promoting the use of trans-Atlantic phone service.

Of course you already knew we could call across the ocean in 1956. But did you know how for all practical purposes few people could ever afford actually to do it?

Near the end of the ad the copy declares that calling Europe “is easy to do” and the cost is “lower than most people think”.

But not lower than you think, living comfortably in 2013, I guarantee that.

“The daytime rate for the first three minutes from anywhere in the United States is $12…” and that’s not even including the tax.

Did you get that? To put the cost into perspective, the average person in 1956 earned about $4200. With that rough benchmark we can say that one 1956 dollar is equivalent to about  seven 2013 dollars.

And with that you realize that calling overseas was a rare luxury for all but the most wealthy people. If your son had gone overseas to study in Oxford University in 1956 all your communication would have been via letter, except perhaps for a quick three minute phone call on Christmas eve.

By contrast, today Sub-Saharan African villagers who earn mere dollars a day can call you on their new smart phones.

That’s the world changed in less than sixty years.