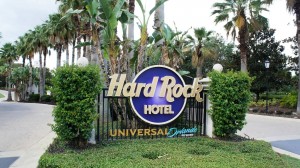 Early this morning I returned from a few days family vacation at Universal Studios in Orlando, Florida. In the spirit of Alexis de Tocqueville’s famous 1835 treatise Democracy in America written following his visit to the new world, I have compiled my own modest notes on my visit to Orlando.

This first installment is inspired by our stay at the Hard Rock Hotel in Orlando (one of three Universal Studios Theme Park hotels). The hotel is part of the Hard Rock brand, better known for their Hard Rock Cafes. And like the cafes, the hotel features a “Rock and roll” lifestyle theme, replete with music in the lobby and pool area and rock memorabilia featured in hallowed glass cases throughout the hotel. (In order to find our hotel room I had to remember to take a right at Eddie Vedder’s jacket and a left at Bob Marley’s portrait.)

Putting on my de Tocqueville glasses with their attention to cultural detail, I looked at my resort surroundings and asked myself “Just what is the rock and roll lifestyle supposed to be?”

The first clue came in the hotel room itself. While the room had a broad range of amenities, it was missing one feature present in even the most fleabag roadside motel: a Gideon’s Bible. Why? Presumably cause the rock and roll lifestyle is sex, drugs, and, er, rock and roll, baby! And there’s no room there for religion!

Hard Rock clearly plays with the theme of the hedonistic lifestyle as constituting the narrative of rock and roll. For instance, the breakfast buffet features a “Rockstar Breakfast” option which includes unlimited mimosas, champagne and bloody marys, all for only $31.50! (We did the breakfast buffet one day, but we passed over the “Rockstar option”. So far as I could see from the restaurant crowded with families and not a rockstar in sight, everyone else passed it by as well.)

That’s a great example of how the Hard Rock Hotel wants to play around with the hedonism theme: drink a bottle of champagne with your scrambled eggs … right before you go on the Universal Studios rollercoaster.

There’s a good reason I said that the Hard Rock merely plays with this hedonism theme: because they don’t really want their guests to be true rock and roll hedonists. The reason is simple: rock and roll hedonism is ugly, self-destructive, and destructive of all you come into contact with. (In the satirical mockumentary “Spinal Tap” about a fictional heavy metal band, the band members note how one of their former drummers died by choking on someone else’s vomit, a death that ratchets up the almost cliched demise of the rock star who chokes on his own vomit.)

Never was there a better song about rock and roll hedonism than Joe Walsh’s “Life’s Been Good,” a fascinating warts-and-all depiction of the man-child rock star. Walsh sings:

If you were the manager at the Hard Rock would you want this rude, self-absorbed jerk staying in your hotel, punching holes in the walls and vomiting on the carpet? Or would you prefer a quiet young family who were in bed early and gone off to the theme park by 9 the next morning? I’m quite sure the Hard Rock managers and staff prefer the quiet young families, even though the “Rockstar option” on the menu plays at the self-destructive narcissist.

Here’s another sobering depiction of the mega-jerk rock stars and the destruction they visit on poor, unsuspecting hotel rooms. In this case we have Grand Funk Railroad (yes, another hopelessly dated cultural reference from the mid-seventies) singing proudly of the depths of their self-destructive hedonism:

Four young chiquitas in Omaha
Waitin’ for the band to return from the show
Feelin’ good, feelin’ right, it’s Saturday night
The hotel detective, he was outta sight

Now these fine ladies, they had a plan
They was out to meet the boys in the band
They said, “Come on dudes, let’s get it on!”
And we proceeded to tear that hotel down

Can you imagine being the poor family unlucky enough to have the hotel room right next to these complete idiots? And then to add insult to injury these fools have the audacity to title this paean to crass self-indulgence “We’re an American Band” as if being “American” and a musical performer means you are a hedonistic jerk.

Maybe it is time to reinvent the narrative of rock and roll. Let’s set aside the self-destructive machinations of hedonism and go to the deeper tap root: individuality and rebellion. That brings us to the real essence of rock and roll, and fortunately it is an essence that liberates us from callow hedonism.

Consider Grand Funk Railroad again. When they sang “We’re an American Band” they were rehashing a tired trope (yes it was already tired in the seventies) that rock is about devil-may-care indulgence. They were conforming to that trope and engaging in trifling acts of puerile rebellion against the “hotel detective”.

I remember here a scene in the film “Almost Famous” in which a young reporter for “Rolling Stone Magazine” goes on tour with a fictional band called “Stillwater” in the early seventies. Initially he is starstruck by the band and their lifestyle. But gradually the cracks appear and he realizes the members are little more than immature users of others who are desperate that he, the reporter for “Rolling Stone”, make them “look cool”.

This brings me back to Grand Funk Railroad. Back in the eighties the one-time lead singer, guitarist and main songwriter, Mark Farner, became a Christian. Like countless performers before and since (from Bob Dylan to Brian “Head” Welch) he discovered that the Bible does belong in the Hard Rock Hotel. And he discovered that true rebellion involves rejecting the overarching narcissistic narrative in your culture in favor of something more substantial (even if further commercial success doesn’t come in its train).

Rock and roll is full of true rebels like this who are reclaiming the narrative for a deeper sense of individuality and rebellion. Think, for example, of Bono, a Christian and singer of perhaps the world’s biggest rock band, who has been singing about true social change and rebellion against unjust social structures for decades. I am reminded here of G.K. Chesterton’s famous observation about his conversion to Christianity: “I did try to found a little heresy of my own; and when I had put the last touches to it, I  discovered that it was orthodoxy.”

As true rock and roll rebels like Mark Farner, Brian Welch and Bono remind us, there is room for a Gideon’s Bible at the Hard Rock Hotel.