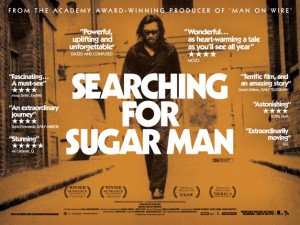 Documentaries typically don’t get center stage at the Oscars. But this year a truly worthy film won the title. “Searching for Sugar Man” tells the story of psychadelic folk rock singer Sixto Rodriguez. Never heard of him? You’re not the only one. His first album “Cold Fact” (1970) sunk beneath the waves without a trace, despite being praised by critics as a masterpiece. His second album “Coming from Reality” (1971) met a similar fate: beloved by critics while inexplicably overlooked by the record-buying public. He was promptly dropped from his record label two weeks before Christmas and spent the next thirty years or so living near the poverty line on the mean streets of Detroit, working long hours at manual labor to raise his three daughters.

What Rodriguez didn’t know is that through a strange twist of fate his two albums had somehow made it to South Africa shortly after he sank into musical oblivion. In the 1970s Rodriguez’s music became the soundtrack of a generation struggling against Apartheid and in this country of fifty million at the bottom of Africa he became a true superstar.

And yet Rodriguez never saw a single penny in royalties.

“Searching for Sugar Man” tells the story of how South African devotees of Rodriguez’s music finally found the singer living a quiet life in Detroit. (For years rumors had circulated among his legions of South African fans that he had committed suicide in the early 1970s.) In one scene a South African man nicknamed “Sugar” (guess why) finally speaks for the first time on the phone with Rodriguez. He tells Rodriguez that the singer is more famous than Elvis in South Africa and he invites — nay begs — Rodriguez to come visit his nation of adoring fans.

So Rodriguez gets on a plane with his daughters and arrives at the airport in South Africa. There on the tarmac he sees three limousines. He thinks to himself, “Wow, those must be for somebody important.” Little does he know they are waiting for him. He arrives at the hotel and is ushered into the penthouse. But he opts to sleep on the couch because he doesn’t want the maid to have to make the bed the next morning. Then he is ushered onto the stage in front of thousands of screaming fans who have been singing his socially conscious songs for thirty years. And at long last this humble man who had spent his life quietly working for subsistence wages finds the legions of fans he never knew he had.

In case you’re wondering, yes the royalties checks are now finally arriving. And as his daughters observe, he gives the money away as fast as he receives it.

Jesus said the meek shall inherit the earth. In this case, at least, one of them also finally found his audience.