What does each side mean when they make these declarations? Let’s take a closer look at the reasoning. 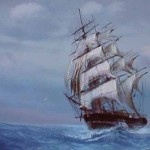 To illustrate the theist’s reasoning (in at least many cases) we can consider the rudder of a ship. A rudder is miniscule relative to the ship but desipte its diminutive size, it directs the entire vessel. This makes the rudder hugely significant for the overall ship, much more so than virtually any other part of the ship which is of comparative size. Similarly, the theist believes that our lives on earth comprise a mere moment against the vastness of eternity — perhaps four score and seven years if we’re lucky — and yet like a rudder for a ship this moment sets us up for our eternal destiny. In that sense our earthly lives are imbued with significant moments that will set our course for eternity. 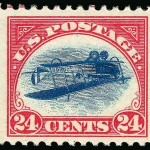 The atheist (in at least many cases) seems to be motivated by the link between significance (or value) and scarcity. Think of the famous “Inverted Jenny” stamp. If you were to find one in the drawer of an old house you might not think much of it. After all, the stated value is a mere 24 cents. Then you realize that the stamp has an error … an upside down airplane. And you discover that it was printed in 1918. And there are only a hundred known to exist. And somehow this flimsy, tiny piece of paper with this rare history has made its way into your hand. Suddenly you realize that the scarcity of the stamp gives it a monumental significance which is expressed in a market value of hundreds of thousands of dollars.

When you consider the finitude of human existence — the astronomical improbability that we should have come to exist at all, the dizzying brevity of our life against the backdrop of a universe billions of years old — you realize that the life you live, like the stamp in your hand, is as significant as its existence is tenuous. And in the moment that this realization transforms our appreciation for the stamp, leading us to care for that which might otherwise be discarded, so we should care for the lives we live.

Let’s ask the theist: what if tomorrow you came to believe that God had determined that our lives end at death. Would life still be meaningful?

Now let’s ask the atheist: what if tomorrow scientists announced that human life was a physically necessary product of this universe? And what if they added that this discovery had helped them achieve immortality for the human species? Would life still be meaningful?