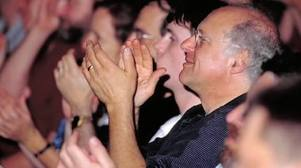 Some years ago a friend of mine told me he’d switched churches because he “didn’t get anything out of the worship.” I replied, “Worship isn’t about getting. It’s about giving.” Within a few moments we’d moved on in our discussion and soon I forgot the exchange altogether. But my friend didn’t. Years later he reminded me of that simple exchange and how it’d provided the first step in a revolution in his ecclesiology (or doctrine of the church). If I may borrow a line from Kennedy, he’d shifted from asking “What can church do for me?” to “What can I do for the church?”

While my friend had unwittingly adopted the role of a consumer when thinking about church, he can hardly be blamed for it. Churches frequently reinforce the assumption that the church is there for the congregant, and as a result neighborhood churches jostle for position as they attempt to attract congregants from the surrounding communities. Dynamic preaching, exciting music, a broad range of programs, convenient parking, an attractive website, and a soft-sell Christianity all reinforce the idea that the church is there for you. (See my article “Is the church supposed to be ‘a place for you‘?”)

The consumer mentality affects churches in many subtle (and not so subtle) ways. Consider one of them: the tyranny of applause. The pastor prays for the offering. And then the deacons fan out as the offertory begins, a thoughtful melody of hymns played on a piano or violin by a congregant. Then as soon as the performance is concluded the congregation bursts into applause. I understand the sentiment. We want to encourage and thank. But the problem is the presumption of the congregation that the performance is for them, as if they’re the audience, the consumers of the product offered by the church.

Sadly, this has things completely backwards. The congregants, no less than the pastors and musicians, are part of the performance. Imagine if you went to a play and as the actors carried out their respective roles they kept pausing to applaud the performances of their fellow actors. You’d be thinking: hey wait a minute, that’s my job! (Philip Yancey makes a similar point in his book Church: Why Bother?)

The minute we enter church we are entering a performance and we’re part of it. That’s why my friend’s thinking was so askew. He was thinking the musicians were leading worship to entertain him. But in point of fact, their role was to lead him in his performance.

This is a sobering fact for an individual like myself. As an academic theologian I have more ability than the average congregant to provide informed critiques of that which goes on around me. And while some of my criticisms may very well be legitimate, the danger is that in playing the critic of everyone else I will end up putting on a poor performance.

I am not suggesting that when the children’s choir completes a musical performance that the congregation is obliged to sit on their hands. If there’s ever an exception to prove the general rule, it is here. So yes, I’m okay clapping for the kids.

But as for that general rule, it really is an important lesson for us all to remember that in corporate worship we are all in performance and the only applause we should be waiting to hear is that which comes from above.