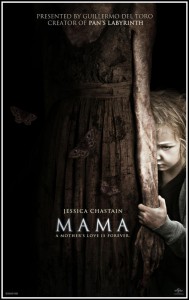 The other day I watched the new supernatural thriller “Mama”, a truly fine exemplar of Spanish horror and reminiscent of other memorable Spanish films like “Pan’s Labyrinth”, “Rec” and “The Orphanage.” While the film was directed by Andrés Muschietti, it bears the imprimatur of Guillermo del Toro, which is not that surprising given that del Toro served as executive producer. The film also enjoys a strong cast including the barely recognizable Jessica Chastain who is also currently starring in the acclaimed “Zero Dark Thirty” (not to mention the stellar film “Take Shelter” which I reviewed here). However, the real star of “Mama” is a very angry, one hundred fifty year old ghost.

I have long been fascinated by well made supernatural films like this. And one important reason is that ghosts have long been a part of the Judeo-Christian worldview. For further discussion see my articles “Should Christians believe in ghosts?” and “Purgatory for Protestants.” (Incidentally Protestant philosopher Jerry Walls only briefly touches on the topic of ghosts in his recent defense of purgatory, Purgatory: The Logic of Total Transformation (Oxford University Press, 2011).)

If you want a good reason to believe in ghosts then here it is: Jesus believed in them. Consider the passage in Luke 24 immediately following the Road to Emmaus pericope. The disciples are discussing the bizarre account of the two men when Jesus suddenly appears in their midst. Note very carefully what he says:

36 While they were still talking about this, Jesus himself stood among them and said to them, “Peace be with you.”

37 They were startled and frightened, thinking they saw a ghost. 38 He said to them, “Why are you troubled, and why do doubts rise in your minds? 39 Look at my hands and my feet. It is I myself! Touch me and see; a ghost does not have flesh and bones, as you see I have.”

This is very significant. Rather than respond “What are you talking about? There are no ghosts!” Jesus instead replies by pointing out that the spectral bodies of ghosts have different properties than his body has. Thus, he can’t be a ghost. The entire response assumes the existence of ghosts.

Note a second thing. Jesus doesn’t say “What are you talking about? Ghosts are consigned to hades!” Never does Jesus question the fact that ghosts can possibly be seen by and interact with living human beings. Instead, as we’ve already noted, he simply replies that his body has properties which demonstrate that it is not a spectral ghostly body.

So while Jesus’ primary point here is to establish that he has been resurrected, the background assumptions are that ghosts do exist and it is possible to see them. Of course Jesus would also affirm the Torah prohibitions against attempting to contact the dead. But that doesn’t change the fact that on Jesus’ view it is possible to see and interact with ghosts.

One could reply that Jesus believed all sorts of things as part of his first century Jewish worldview that we wouldn’t necessarily accept today. That may be. However, I would propose that the way of wisdom for a Christian is to adopt a conservatism about the beliefs of Jesus. In other words, the fact that Jesus believed p provides for the Christian a prima facie reason for the Christian to believe p as well. Since Jesus believed in ghosts we have a prima facie reason to believe in ghosts as well. This prima facie reason will become moot for a Christian who believes ghosts do not exist on independent grounds. But I don’t see any persuasive independent grounds to take that position and so I defer to Jesus’ opinion that ghosts exist and can interact with the world around us.