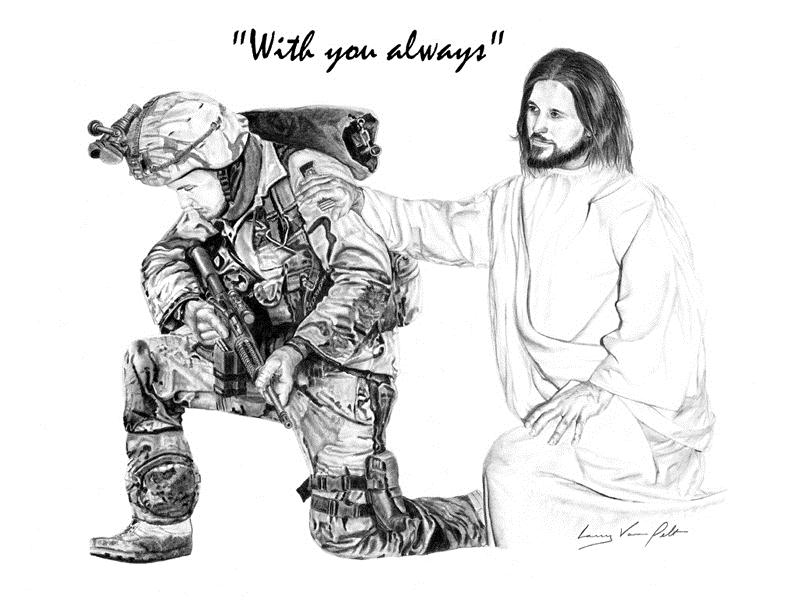 Let’s set aside the kitschy nature of this image and ask a very important question. What does it mean for Jesus to be placing a hand on the shoulder of a praying soldier and declaring that he is with the soldier always?

The allusion is presumably to Matthew 28:20, a passage which caps off the Great Commission. Let’s consider the whole passage:

16 Then the eleven disciples went to Galilee, to the mountain where Jesus had told them to go. 17 When they saw him, they worshiped him; but some doubted. 18 Then Jesus came to them and said, “All authority in heaven and on earth has been given to me. 19 Therefore go and make disciples of all nations, baptizing them in the name of the Father and of the Son and of the Holy Spirit, 20 and teaching them to obey everything I have commanded you. And surely I am with you always, to the very end of the age.”

So in context Jesus is saying that he is with his disciples as they make more disciples for him and baptize those new disciples in his name. That’s the immediate context. However, the extended context could be taken to encompass all later disciples who also make disciples and baptize them. And that would mean, for example, that Jesus is with you always when you’re baptizing new congregants in an African village and when I’m ladling out soup in the inner city gospel mission.

But this fellow doesn’t look like he’s getting ready to preach and baptize. After all, most pastors aren’t sporting night vision, camouflauge and an M-16 in their sweaty palms. (Needless to say, this gentleman also was not one of the original disciples.)

So this passage appears to be taking the text and extending it further yet. Perhaps the idea is that Jesus is with anyone who seeks to be a faithful witness and carry out a vocational call in whatever life circumstances they may find themselves. Think, for example, of Dave the oil rig worker who wants to be a faithful witness for Jesus as he goes to work among the other roughnecks on the oil rigs. Or think of Abdul, a convert from Islam who sells fruit from his cart in Morocco. Is it theologically appropriate and meaningful to encourage Dave and Abdul that Jesus is with them based on an extension of the force of Matthew 28:20? That would seem like a legitimate extension of the text.

And so there’s the soldier gazing at this picture. Does Jesus go with the soldier into battle?

Well let’s pause and think about this for a moment. I have the utmost respect for soldiers, people who place their lives at risk for the rest of society. (See, for example, my article “How to support the troops on Memorial Day.”) Nonetheless, I have great concerns for the range of application an image such as this could have.

Let me give you a concrete example. Imagine that the soldier is Paul Tibbets, pilot of the Enola Gay, and he’s just about to go on his mission to drop Little Boy on Hiroshima, an act that will result in the murder of tens of thousands of civilians. Was Jesus with Tibbets always throughout his mission? What would that even mean? Let’s put it this way. Imagine another kitschy, sentimentalized drawing, this one of young Tibbets flying over Hiroshima the moment the bomb is dropped. And Jesus is sitting serenely beside him with a hand on the young man’s shoulder, gazing at him with loving eyes. Above the scene we read the reassuring caption “With you always”.

This brings me to the central problem. Images like this seem to serve a “With God on our side” theology  that has been the justifying framework for no end of history’s atrocities. And in that sense it can be used to reassure disciples to carry out actions in the name of nation states and political causes that Jesus would never have approved of. As Bob Dylan put it the lyrics of his song “With God on Our Side”:

“One push of a button, and a shock the worldwide.

And you never ask questions when God’s on your side.”