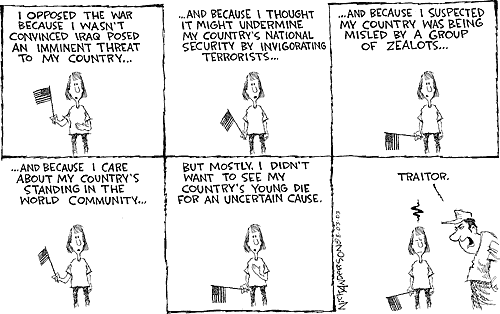 Do you remember back in 2003 when the Dixie Chicks were banned from radio and received death threats simply because their lead singer Natalie Maines dared to speak out against George Bush and his pending invasion of Iraq? There’s nothing like nationalism run amok to make the world a dangerous place for moderation and reasoned discourse. In that kind of world the word “traitor” becomes a devastating indictment that becomes like a hurricane force wind blowing away the matchstick construction of reasoned discourse.

Tragically, one often finds a similar effect in some conservative Christian communities, although there the devastating indictment shifts to a moniker like “liberal” or “heretic”. But the message is essentially the same: a raising questions or doubts makes you a traitor to Christian fidelity. So the questions and doubts never get raised, for who wants to be called a traitor or heretic?

This may keep the conservative guards of the status quo happy, but the effect on reasoned discourse and open, honest communication is stultifying.

My favorite metaphor for the importance of open questioning and reformation comes from the last place you might expect: a pope. However, John XXIII wasn’t your typical pope. He was elected as a transitional pope by a fractured cardinalate. But this was no caretaker. Soon John was speaking of aggiornamento, an updating of the church. And to explain what he meant John flung open a window, allowing a draft of refreshing air to blow into the stuffy room. Within a matter of months Vatican II had begun, the most important updating of the Roman Catholic Church since the sixteenth century.