“All your words are true;
all your righteous laws are eternal.”

Imagine that you open up the newspaper one day and read the following article:

(Kabul, Afghanistan) Yesterday reports surfaced of a public stoning in the city of Saidu Sharif in the Swat Valley of eastern Afghanistan. Early reports identify two parents as presenting their thirteen year old son to public authorities for being “stubborn and rebellious”. Town elders gathered together and stoned the boy until he was dead. The Al Qaeda held district of Swat has become notorious in recent months for its enforcement of a strict Sharia law. (Associated Press) 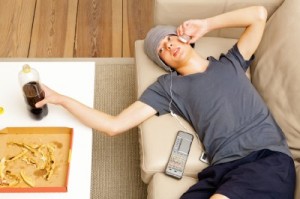 What would be your reaction upon reading that article? Horror? Disgust? Outrage? Would you be haunted by the thought of a terrified child’s screams? The image of a heavy rock spattering brains and blood on the dusty ground? The sound of bones splintering? You’d probably ask “How could any parent do something so wicked?!”  And then you’d go find your own thirteen year old son lounging on the couch and talking on the phone with his buddy, and you’d give him a big hug.

“What’s that about?” he says, looking up at you like you’re crazy.

You look down at the loveable oaf. “Just because we love you son.”

And yet our hypothetical scenario in the Al Qaeda controlled Swat Valley of Afghanistan could be drawn straight out of the Torah mandate for dealing with rebellious children. Exodus 21:15 states “Anyone who attacks their father or mother is to be put to death.” And then there is the vivid instruction of Deuteronomy 21:18-21:

18 If someone has a stubborn and rebellious son who does not obey his father and mother and will not listen to them when they discipline him, 19 his father and mother shall take hold of him and bring him to the elders at the gate of his town. 20 They shall say to the elders, “This son of ours is stubborn and rebellious. He will not obey us. He is a glutton and a drunkard.” 21 Then all the men of his town are to stone him to death. You must purge the evil from among you. All Israel will hear of it and be afraid.

When we read of such events in modern Afghanistan we count them unequivocally as moral horrors. Was the moral structure of the universe really radically different in ancient Israel?

Here’s one of the most beautiful things about having parents: unconditional love. Those of us who have been nurtured on the unconditional love of great parents can certainly resonate with this fact. I’ve known people who were raised with parents who took them out behind the woodpile for a beating when they misbehaved. I have never known a person who suffered from such extreme violence at the hand of their parent and who simultaneously enjoyed a close, intimate, loving relationship with that parent. (I’m not saying it can’t happen. But I am saying that generally speaking the more violence a parent inflicts or is willing to inflict upon a child, the less intimate the relationship between the child and parent.)  Can you imagine what it would do to the parent-child relationship if it was a real, live possiblity that your parent could bring you out to be pelted to death with rocks by all the men of the town? 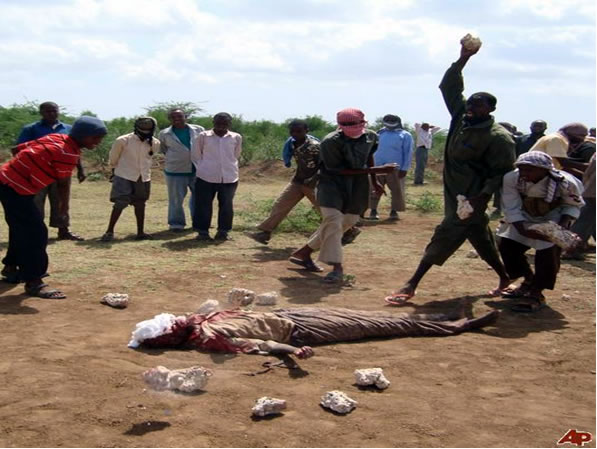 The picture on the right is of a public stoning in Somalia. I debated whether to include it or not. But then I remembered that the very Christian conservatives who are often so anxious to defend biblical violence are also keen to fight abortion by providing images of the aborted fetus. And I agree with that because it is one thing to approve abortion of a “blob of tissue”. It’s another to approve it of a fetus that looks, for all intents and purposes, like a very small baby.

Likewise, it is one thing to approve of the idea of stoning children to death because you read an abstract reference to the practice in the Bible. It is another to reflect on the idea by meditating on a real image from a public stoning.

So ask yourself as a parent: how stubborn and rebellious would my child have to be before I would bring them before the town elders to be pelted to death with rocks?

Thinking about the Law

A little more than a week ago Angra Mainyu asked me to respond to some of the stipulations in the Torah. Mainyu requested that I address legal stipulations like the following:

1. Burn two women and one man to death if they were mother and daughter and he married them both (Leviticus 20:14).

2. Burn a woman to death if she was the daughter of a priest and was also a prostitute (or, in some translation, committed adultery)  (Leviticus 21:9).

3. Stone a woman to death if (among, perhaps, other cases) she marries a man who believes she’s a virgin, but after having sex with her accuses her of having lost her virginity earlier, and the “tokens of virginity” are not found (Deuteronomy 22:13-21)

I have chosen to discuss the stoning of children instead, though one could readily have a discussion about any one of these topics. So how do we respond?

A few weeks ago Jerry Shepherd offered a response to explain why he believes God commanded the genocide of other peoples. He suggested that God was accommodating to the practices of the Ancient Near East. Because other peoples engaged in genocidal slaughter when they practiced war, God commanded it of the Israelites as well. I replied by noting that other common practices of war have included cannibalism and gang rape of defeated soliders. So is it possible that God could accommodate those practices as well by commanding cannibalism and gang rape of deafeated soldiers? Jerry opted not to reply.

But note something really important. When people invoke accommodationist interpretations of the Torah they find themselves at odds with the perspective of the psalmist who wrote Psalm 119. When he thinks of God’s law he doesn’t think “accommodation to a fallen world”. He thinks moral perfection.

You have laid down precepts
that are to be fully obeyed.
5 Oh, that my ways were steadfast
in obeying your decrees!
6 Then I would not be put to shame
when I consider all your commands.
7 I will praise you with an upright heart
as I learn your righteous laws.
8 I will obey your decrees;
do not utterly forsake me.

One can only imagine that the psalmist would pray to have the moral fortitude to turn over a rebellious child to be stoned. And if he did he would think he’d done something beautiful and glorious, even as he watched his son or daughter being smashed to bits by great hunks of granite and shale.

So if you want to be faithful to the psalmist’s perspective on filicide you’d consider not a milquetoast accommodation to ANE standards of justice. Rather, you’ll embrace such killing as a beautiful submission to God’s eternal, righteous decrees. In this case accommodation is the worst of all possible options because it reflects neither the law as it was understood or the nature of our moral aversion to it.