Imagine that you are a geologist in the late nineteenth century. Your goal is an ambitious one: develop a theory that can explain the following geologic features: volcanoes, moutain ranges, earthquakes, and the puzzle-piece like fit of Africa and South America. A single, over-arching theory to explain all these varied phenomena? That would be ambitious indeed, and in an age before plate tectonics, it would be hard to conceive what creative minds might come up with.

When it comes to atonement theology we are in the age before plate tectonics. That is, we have a range of extraordinary effects extending throughout the cosmos which we seek to attribute to a single cause, but we lack any mechanism and embedding explanatory framework to explain how all these varied effects relate to the single cause.

In his essay on the Christus Victor model of atonement, Gregory A. Boyd summarizes the range of effects Christians attribute to the causal power of the atonement:

This passage presents us with seven explananda (that is, facts to be explained) which Boyd identifies as resulting from the atonement:

(3)  Reconciliation of all things;

In some of these cases it is relatively straightforward to see how the atoning work of Christ provides an account of the explanandum in question. For example, it seems relatively clear how the atonement explains (7). It is much less clear how the atonement explains some of the other facts. However, an atonement theory is only successful as a theory if it can account for all these effects in a single, unified explanation in parallel to plate tectonics. We can explore this problem by mulling over the oft-overlooked cosmic implications of (3). 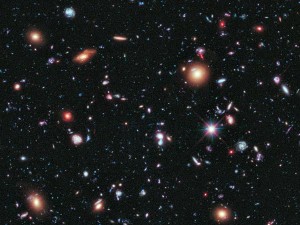 What did the cross achieve?

We can start with an image that may one day be considered iconic. On September 25, 2012, NASA released the XDF or “eXtreme Deep Field” image, a photo composite of ten years of data drawn from the Hubble Space Telescope which was focused on the center of the Hubble Ultra Deep Field. The extraordinary image reveals over five thousand unimaginably distant galaxies, some of which are 13.2 billion light years from earth.

So here’s the question for a theory of atonement: how does the atoning work of Christ reconcile the part of the universe portrayed in the XDF? What would that even mean? (As an aside, keep in mind that the XDF image is a snapshot thirteen billion years into the past. Whatever is there now looks very different from the galaxies in the image.)

Many Christians might be inclined to reject (3). Jesus came to reconcile and heal humanity, not distant galaxies. Indeed, one might argue that it isn’t even coherent to speak of the reconciliation of a region of deep space.

While it might be tempting to keep the atonement focused on human beings alone, the New Testament does point to cosmic effects from the atonement. Passages like Romans 8:19-21 and Colossians 1:20 really do seem to extend the effects of the atonement to the whole of the created sphere. The fact that Paul could never have conceived of the XDF is quite irrelevant to the fact that his statements encompass the entirety of creation, including that region of deep space.

An illustration of the limitation of anthropocentric theories of atonement

Consider an illustration of the problem. Whatever your personal views of climate change, imagine that the phenomenon is very real and that projections remain in place that CO2 will increase to 650 parts per million by the end of the century. Then scientists develop a new harmless bacteria that the media dubs the “Gobble Bacteria” for its ability to consume large amounts of CO2. Governments around the world use the Gobble Bacteria to bring the global levels of CO2 back to 350 parts per million, thereby stalling the progress of climate change and preventing a global crisis. Now there are two intertwined questions: what did the Gobble Bacteria achieve for the whole world and how did it achieve that?

Let’s focus on the former question by considering one provincial account of that effect. Imagine that “Florida Sportsman” Magazine runs an article called “The Good News of the Gobble Bacteria.” The article goes on to explain how the bacteria has saved the Florida Everglades from a devastating saltwater intrusion that would have come with global warming, thereby protecting an ecosystem highly valued by the readers of “Florida Sportsman”.

You could recognize that this account of the way the bacteria saved the Florida Everglades was a valuable insight. But you would also think it rather provincial and limited if taken to be providing the central account of what the bacteria accomplished. What about the impact of the bacteria on the deserts of Africa? The Great Barrier Reef of Australia? The ice sheets of Greenland and sea ice of the Arctic? Consequently, while the story identifies an important effect, you could reasonably conclude that the readers of “Florida Sportsman” would be best served if their understanding of the impact of the bacteria on the Everglades were embedded within a comprehensive narrative of what that accomplishment meant for the planet on the whole.