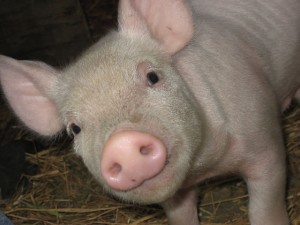 Like many people, I enjoy my bacon, ham and sausage. But I’ve never killed a pig and I don’t intend to. Is that a problem?

You might think not. After all, there are all sorts of benefits we enjoy in civilized society which depend on societal roles that we ourselves would not choose to fulfill. I’ve benefited from the expertise of my dentist but I’d never choose to be putting my hands into other people’s mouths all day long. Clearly it isn’t wrong for me to benefit from the dentist’s expertise. So why is it wrong to benefit from the butcher’s expertise?

I can illumine this intuition by reflecting with care on the steps involved in slaughtering an animal. The pig is sitting serenely in his stall, minding his own business as I am handed a captive bold pistol like that immortalized in “No Country for Old Men”. “Shoot ‘im in the head” I’m told. “Then string ‘im up and bleed ‘im out.” I turn ashen white and feel light headed. The animal turns to look at me curiously, his snout wiggling, making small grunting noises that recall to mind Wilbur and Babe and Chester the Worldly Pig.

“Those are fictional pigs!” I tell myself. “Focus!” But the gun feels too heavy in my hands. “He’s not doing anything to anybody.” I think to myself. “What if I miss?” I’m horrified at the thought of those peaceable eyes turning wild should I shoot wrong. I recall the words of a friend describing his time working on the slaughterhouse floor. “You don’t want to miss,” he said with a faraway look in his eye, “cause things can get messy very quickly.”

A fear lingers in the back of my mind. It is the fear that I will only be able to kill this pig by trading a bit of my humanity. It is a trade I don’t want to make. I set the gun down, trembling. “Maybe I don’t want to eat pork anymore.” I say.