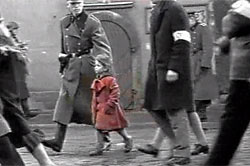 Elie Wiesel escaped the concentration camps of Nazi Germany and then wrote a bestselling, critically acclaimed book describing his harrowing experiences (Night). So you might think he knows something about God and suffering. For this reason I paid close attention when Wiesel turned to address the problem of suffering in his 1995 book All Rivers Run to the Sea: Memoirs (New York: Knopf, 1995). The discussion comes in a mere three pages (103-5) after a harrowing discussion of the Holocaust. It comes with the deceptively simple title: “God’s suffering: A Commentary.”

While the passage may be brief, there is much there to contemplate. When I first read the commentary seventeen years ago I was especially taken by the following passage:

“God accompanies his children into exile. This is a central theme of Midrashic and mystical thought in Jewish tradition. Just as the people of Israel’s solitude mirrors the Lord’s so the suffering of men finds its extension in that of their creator. Though imposed by God, the punishment goes beyond those upon whom it falls, encompassing the Judge himself. And it is God who wills it so.”

As I read this passage I am immediately struck by several things. The first was the strikingly incarnational tone of the passage. For Wiesel, this is the final answer to suffering, that God accompanies us in it. And this is precisely what Christians believe: God accompanies his children into exile. Christians believe that in some profound sense the punishment experienced by the people also encompasses the judge himself. When reading Wiesel’s words I think the Midrashic parable became flesh and dwelt among us.

There are also a couple things that are troubling about this passage. To begin with, keep in mind that this is an illustration being proposed against the backdrop of why the Jews endured the Holocaust. And now note the reference in the final paragraph to punishment. It may be a comfort to believe that God was suffering with the Jews in the Holocaust. But is it a comfort to think of it as suffering that is being endured as punishment? Who today would dare propose that the Holocaust was a punishment for individual and corporate sin? Think, for example, of the little girl in the red coat in Schindler’s List. Did God punish her through the brutality of the Nazis? Is this possible?

This brings us to another question concerning the behavior of the king in the parable. It seems to be presented as a comfort of sorts, but in many respects it is perplexing, perhaps even chillling. What kind of individual sends his loving consort out to suffer the terrors of exile? That is bad enough. But then to follower her into exile? That appears to be the behavior of a psychologically fractured individual.

Consider an analogy. Imagine that Dave and his wife Shirley go out for dinner to a nice restaurant in a rough part of town. After the meal Shirley goes to the washroom. When she comes back out she finds that Dave has disappeared and the car is gone. Terrified, she is forced to walk home through the dark and dangerous city streets. When she finally returns home she finds Dave there. “Why did you leave me?” Shirley screams. Dave replies, “Know this, that I could not bear to be without you so I walked home a block behind you.” What sort of comfort would that be? You can bet on one thing: from now on Shirley will make sure she’s got the car keys.

It would be easy to deconstruct Wiesel’s commentary. But that’s not my intention. My intention, rather, is to have an honest conversation with it and to admit that after my problems have been expressed there is still something about it that I find compelling. Whatever one may say about the claim of suffering as punishment or the idiosyncratic actions of the king, I remain taken by the choice of one in a high estate choosing to identify with those who suffer.