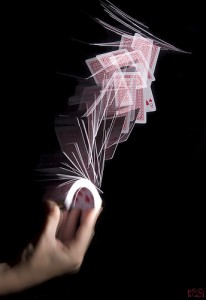 In my rebuttal to John Loftus’ essay that the cumulative claims of Christianity are “wildly improbable” I pointed out that this argument has no force for those who already accept the cumulative claims of Christianity. To make the point I gave an illustration which I’ll streamline slightly here. Imagine that you tell me your new neighbor is a transsexual Swede named Mario. “No, way,” I retort. “Have you calculated the chances of a single individual satisfying that description? They’re infinitesimal. You must be wrong.”

It should be obvious where I would have gone wrong. While it may indeed be enormously improbable to speculate with no reason that your new neighbor will end up satisfying such an improbable and complex description, if you already have reason to believe your neighbor satisfies this description, I can’t reasonably retort at this point that this is unlikely. By the same token, if people already believe the claims of Christianity it is beside the point to retort “But what is the chance that all those things should just happen to be true?”

Okay, that was review. Now on to some new discussion. Jeff responded to this argument as follows:

Rather than vague talk about probabilities, it would be more helpful to discuss the principle of historical analogy. Although the prior probabilities are very low that one’s new neighbor will be a Swedish transsexual named Mario, there’s no inherent difficulty with such a scenario, because we all know of Swedes, transsexuals, and folks named Mario.

By contrast, we don’t have any experience whatsoever with several-days-dead bodies coming back to life. So without some sort of astounding evidence for the physical resurrection on Jesus (and it’s difficult even to imagine what such evidence might consist of), one has no business claiming that the resurrection is the best explanation of the evidence we have. I realize that you’re talking here specifically about defeaters to Christian orthodoxy, and that one might choose to believe the resurrection solely on faith, apart from historical probability. But it seems that so many Christians conflate these issues, so the principle of historical analogy is worth a mention, at least.

Thanks for that Jeff. Good point, and it provides a great segue to discuss the ineradicable place of background presuppositions in our interpretation of what we consider plausible or likely to be true.

Imagine that Tyler asks his younger brother Paulie “You wanna play 52-pick up?” “What’s that?” Paulie asks innocently. Tyler then throws a deck of cards on the floor, says “Pick ’em up” and walks out of the room with a laugh.

Five minutes later Tyler walks back in the room. What are the chances that all the cards will be picked up and neatly placed on the table? That all depends. Did Paulie stay in the room after Tyler walked out? If he did then that outcome is not surprising at all. But what if he immediately followed Tyler out of the room whining and stayed at Tyler’s side until his older brother walked back in the room. And what if, during this whole time, Tyler and Paulie were the only two people in the house? In that case it would be extraordinary — and very creepy — to have all the cards on the table again. So assessment of the probability that the cards will end up on the table depends on whether one believes there is an agent in the room to pick them up. Without an agent it is extremely unlikely but with an agent it is not surprising at all.

So look again at Jeff’s observation: “we don’t have any experience whatsoever with several-days-dead bodies coming back to life.” True, we don’t have any other experience, but that doesn’t preclude the possiblity that God raised Jesus. Similarly, if Paulie stays in the room, then even if we don’t have any prior evidence of him picking up much of anything, it surely would be reasonable to believe that he did in fact pick up the cards.

And so you cannot separate your assessment of probabilities, or more accurately plausibilities, apart from the prior presuppositions you hold as to which entities exist and thus can be appealed to as explanatory causes.