This question was raised in the blog when Walter made the following comment:

If you love to sing now  but will not care for it in your next life, it raises the question of whether you have really been resurrected as essentially the same person, or reincarnated as a new being with only a tenuous connection to the being you once were.

First, let’s consider the similarity between reincarnation and resurrection. Then we can consider the differences and finally circle around to address Walter’s claim.

The two concepts are similar in that both propose a soul that was once embodied ceasing to be embodied and then becoming embodied again at a later date.

However, we should note that this similarity is only between reincarnation and the mainstream view of resurrection. There is a minority view of resurrection — sometimes called the soul extinction view — which believes that human beings are material organisms that cease to exist at death and are recreated at resurrection.

Here’s the crucial difference: while both reincarnation and the mainstream resurrection view accept that a soul becomes disembodied and then reembodied, only resurrection assumes resurrection of the same person. This is really important because it means that reincarnation sunders the normative link assumed in resurrection between soul and person. To be sure, the adherent to mainstream resurrection need not believe that the soul just is a person. He/she may indeed believe this, but he/she may also believe that the soul is an entity which has the capacity to become a person when embodied and attaining a certain level of functional capacity and/or relational actualization whilst embodied.

In contrast to both PEA and PCA, reincarnation assumes that when souls are reembodied they become different people than they were before.

The strange 1995 family film Fluke centers on a dog who has memories of “his” previous life as a human being. But I don’t think it is plausible to think that the dog is the same person. Indeed, I don’t think the dog is a person at all. (Of course all this begs the question of whether a dog could have memories of a human person. This seems very unlikely. But then don’t expect too much philosophical rigor from a low-grade family film.) And of course reincarnation is consistent with the view that a soul now embodied as human could be reincarnated as a worm or a flea, and those most certainly would not be persons. 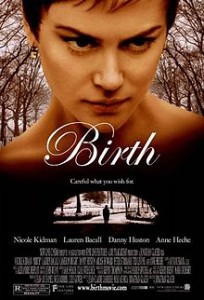 This brings us to the second point. In reincarnation a reembodiment could be the same person. This is where things get messy. Consider the controversial 2004 film “Birth” in which Nicole Kidman plays a still grieving widow who meets a boy that has the memories of her deceased husband (born after the husband died of course) and shares his name “Sean”. Kidman becomes convinced that Sean the boy is Sean her deceased husband. This is important: Kidman’s character is convinced not only that Sean the boy is the same soul as her husband. She is also convinced that he is the same person.

(A disclaimer: I’ve not seen “Fluke” or “Birth” so my discussion of them isn’t a recommendation for what you should rent tonight. If you want a sure-fire great rental, get “Take Shelter.”)

This brings us into the really interesting and endlessly knotty problem of criteria of personhood. What is it that makes a person the same individual over time? A dualist might say it is the same soul, but there are two problems with that response. To begin with, a person might complain that this merely begs the question. (While one often hears that complaint, as a dualist I confess I don’t find it persuasive. Let’s say that you see a beautifully restored Yenko Camaro. What makes it the same car as the one that rolled out of the factory? It makes sense to say “the same body and chassis that rolled out of the factory is now here before you.” So why doesn’t it make sense to say the same soul is now before you?)

Another problem with the same soul response is that the same soul could conceivably produce a different person, even on the resurrection view. Imagine that when God resurrects my soul he attaches it to a female body with completely different memories and he names this new individual “Lucy”. Surely an omnipotent being could accomplish this feat, and if he did then it is equally clear that “Randal” and “Lucy” are not the same person even though they are the same soul. Consequently, we should recognize that on the resurrection view the fact that the same soul becomes (or remains) the same person is a truth of contingent fact rather than metaphysical necessity. (That’s my view anyway.)

So back to “Birth” for a moment. What if the ten year old didn’t have husband Sean’s name but he still had his memories, mannerisms, and the personal conviction that he is the same person as husband Sean. Would this still allow us to conclude that the boy Sean may be the same person as Sean the husband? It would seem so. After all, people change names all the time without changing personhood. (Think of the rock singer Prince who changed his name to an unpronounceable symbol and then, as I understand it, switched back to “Prince”. Nobody disputes that he remained the singer of “Purple Rain” throughout that whole ordeal.)

But what if the boy (let’s now call him “Tommy”) not only changed names but also mannerisms. He didn’t act at all like Sean, but he still had his memories. Would he be the same person?

What if Tommy only had a few bits of memory? Would he still be the same person?

What if Tommy was actually Tammy and she only had a few bits of Sean’s memory? Would Tammy be the same person? At this point it would seem clearly not. Tammy could not plausibly be considered to be the same person as Sean. So it would appear that there is some point between the high continuity of Sean the husband and Sean the boy to the high discontinuity between Sean the husband and Tammy the girl at which we are inclined to think that the continuity of personhood is not retained even though the continuity of soul may have been (i.e. it is still possible conceptually that the non-physical substrate of Tammy’s personhood is the same soul that formed the non-physical substrate of Sean’s personhood).

To sum up, we can fill out our criterion of essential distinction between resurrection and reincarnation as follows:

resurrection assumes the normative continuity of personhood between soul disembodiment and reembodiment but reincarnation makes no such supposition.

Now to Walter’s question. Since it’s been awhile since we read it why don’t we just requote him:

If you love to sing now  but will not care for it in your next life, it raises the question of whether you have really been resurrected as essentially the same person, or reincarnated as a new being with only a tenuous connection to the being you once were.

Walter assumes rightly that there is a normative criterion of personhood operative in resurrection that is not present in reincarnation. However, his criterion for personhood seems dubious. Surely the loss of one dispositional preference is not adequate to call personhood into question. You may know that I hate mushrooms and I consider eating them a clear violation of the natural law. (Lighten up, I’m being facetious.) Let’s say that at the resurrection an individual is reembodied who looks exactly as I now look, who says he is Randal, and who has all the memories and dispositions of Randal (save the sinful dispositions). Except that “Randal” says he likes mushrooms. Would that single difference be sufficient to call the identity of “Randal” as the same Randal who blogs here into question? Nah. After all, it is possible that I could develop a taste for mushrooms in this life (possible, but not at all likely). And if I did I hope you wouldn’t doubt that it was me.

All that is to say that the discontinuity between the person that died and the one that was resurrected would have to be much greater than a single dispositional shift (loss of aversion to mushrooms; loss of interest in singing) for us to call personhood into question.