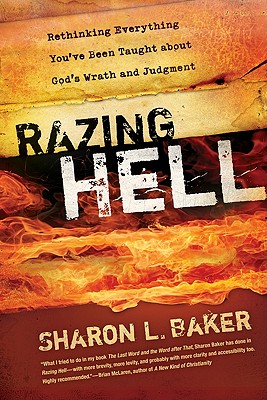 This is the second installment (hence “Part 2”!) in a three part review. For Part 1 click here.

The second part of the book, which seeks to lay a foundation for “An Alternative to Hell, God’s Wrath, and Judgment,” begins with a story from one of Baker’s interlocutors, Lisa, who is agonizing over her critically ill grandmother. Lisa’s friends have told her if her grandmother doesn’t accept Jesus then she will go to hell. Baker comments:

“I know that most Christians do not take delight in the thought that someone will burn in hell forever. And many of us hope, pray, and evangelize in order to bring more people into the kingdom of God. But still, we carry an attitude of smugness about us: we have the right answers and you don’t; we are going to heaven and you’re not.” (51)

Wha? Note again the lack of qualification. Not “Some Christians are smug some of the time” but “Christians have an attitude of smugness, simpliciter.” I mean come on, how about some nuance here?

Anyway, this is the rather off-putting introduction to a chapter on the violence in the Bible and the role that Baker believes it plays in violent theories of atonement and damnation.

Baker begins by observing that cultures in the ANE were framed with the law of retribution. The Hebrews coupled retribution with divine control in human affairs to result at “an image of God as completely controlling and justifiably retributive.” (53) Once again, Baker draws a quick ethical implication by quoting Steve Chalke and Alan Mann: “having a god of power on your side helped justify cruel acts of revenge towards those who had wronged you.” (53)

Regardless, Baker then poses the obvious question: “Did their cultural perspectives and, therefore, their preconceived ideas about God get projected into the Old Testament texts?” (54) Baker is not sure but she suspects so. And she is quick to add that the presence of this kind of projection does not undermine the authority of the texts. Over the rest of the chapter Baker aims to “dig beneath the text” wherever divine violence appears “for the message of truth contained within.” (55)

So how does Baker advise us to deal with this violent depiction of deity? She suggests that we need to “ascertain God’s main message by identifying the reason for the Bible.” (57) This is indeed a reasonable way to proceed. But how convincing is Baker’s reading?

She argues that the purpose of the Bible is to lead us to Christ (John 20:31) and fulfill our joy (1 John 1:4) so that we are equipped for good works (2 Timothy 3:17) and the ministry of reconciliation (2 Corinthians 5:18-20): “God’s main message is one of forgiveness, reconciliation, restoration and peace.” (57) If we want the central message we look to Jesus, and “We don’t see Jesus destroying those who reject God, swinging his sword, chopping off heads, spilling blood in a fit of anger, hell-bent on vengeance. In fact, as he hung on the cross, we see the opposite: he prayed for our forgiveness instead.” (58)

Unfortunately, the New Testament picture of Jesus is more complicated than this. True, Jesus didn’t start chopping off heads during the Sermon on the Mount, but Revelation 19 does present him as a warrior leading an army into gory battle:

11 I saw heaven standing open   and there before me was a white horse, whose rider   is called Faithful and True.   With justice he judges and wages war. 12 His eyes are like blazing fire,   and on his head are many crowns.   He has a name written on him   that no one knows but he himself. 13 He is dressed in a robe dipped in blood,   and his name is the Word of God. 14 The armies of heaven were following him…

It looks like what Baker refers to as the “Jesus lens” for reading scripture might need some polishing if she is to read the text non-violently. The unsatisfactory nature of Baker’s argument is captured in this simple statement:

“Instead of viewing God as the one who commands the killing of entire nations of people, including men, women, children, and animals, let’s peer through the ministry of Jesus, who taught that God did not send him to condemn the world but to save the world.” (67)

Don’t get me wrong. I am not a critic of the project of seeking viable non-violent readings of violent texts. But in this presentation Baker does little to protect herself from the same charge of projection that she attributes to the ancient Israelites. And her less-than-subtle attempt at a force majeure by claiming that violent readings necessarily lead to violent ethical behavior, is simply not compelling.

Baker then turns to the task of rethinking the image of God as a way of conceiving non-violent images of atonement and hell. Baker seeks to read the Old Testament through the Jesus lens. Unfortunately, she has not yet removed that uncomfortable portrayal of Jesus as coming violent judge leading a great army.

Baker writes: “I could quote hundreds of verses to show you the character of God as rescuer and redeemer in the Old Testament….” (71) Well yes, and hundreds of verses could also be quoted to show the character of God as violent and retributive. Unfortunately Baker really hasn’t provided an adequate reason to subordinate the one image to the other. Nor has she provided an adequate reason to think that the projection affects ancient Israel more than it does the theological professor of Messiah College.

Baker then explores three particular images of God as compassion, peace and faithfulness. After this we finally come to the question of one of Baker’s interlocutors: “But how do we pick and choose? How do we know which Old Testament passages refer to the image of God as consistent with God’s character and which ones the community projected into the text due to their worldview?” (76)

While I agree in the main with this response (it is, for example, precisely the way that I propose we read the imprecatory psalms), the fact remains that Baker has not begun to address the violent images of eschatological-glorified Jesus.

Incidentally, it is revealing that Baker quotes Luke 2:14 in the KJV: “Glory to God in the highest, and on earth peace, goodwill toward all people” when she is surely aware that the more correct translation is reflected in the NIV: ““Glory to God in the highest heaven, and on earth peace to those on whom his favor rests.” The difference in translation is due to the fact that the older manuscripts have eudokias (genetive) while the newer, inferior texts on which the KJV was based had eudokia (nominative). The difference in meaning is summarized by Verlyn Verbrugge (from my old Greek textbook!):

“the peace that the angels sang that belonged to the earth as a result of the birth of Christ is not a generic, worldwide peace for all humankind, but a peace limited to those who find favor with God by believing in his Son Jesus….”

It looks like Baker is selectively quoting an inferior and misleading translation as support for her views. This is unfortunate since eudokias is hardly going to topple a theology of non-violence and restorative justice.

Ahh, yes justice, the subject of chapter 7. Here Baker limits herself to two views, the image of retributive justice that she rejects and restorative or reconciling justice that she commends. Baker observes:”If we interpret Scripture as mainly describing God as a God of wrath and a punisher of sin, we will likely interpret justice as more retributive.” “If our view of God places greater focus on divine love and grace, our views of justice will likely be reconciling and restorative.” (83)

We know where this is going. Baker has opted for the image of God as love and grace over-against the image of God as wrath and punisher. And thus she selectively engages the biblical texts that highlight her chosen image. Of course if somebody happened to read Tremper Longman III and Daniel G. Reid’s book God is a Warrior (Zondervan, 1995) they might come away from the biblical text with a very different prioritization of images.

It’s almost as if Baker thought: “Some people are bound to charge me with projection and selective reading, so why bother trying to preempt the charge?”

In the final chapter of Part 2 Baker turns to images of forgiveness. Given her disavowal of divine images of violence, it is no surprise that Baker sees forgiveness as an immediate offer based on repentance with no need for violence: “John the evangelist and Paul the apostle support the idea that God forgives without condition, without our making things right first.” (97) And “In the teaching of Jesus, we are exhorted, through forgiveness, to break the cycle of retribution, an eye for an eye, of getting even.” (98)

According to Baker, forgiveness is a free gift that God offers as the means to restore those separated from him. All this leaves the reader wondering about the overwhelming presence of the temple sacrificial system that culminates in the death of Christ. Doesn’t scripture provide a complex picture in which forgiveness and restoration come through substitution, imputation, death, and finally satisfaction?

All I can do is repeat my wish that Baker would have engaged fully with this overwhelming biblical theme from her perspective of restorative, non-violence.

By this point in reading the book I had a sort of vision. I was sitting having tea with Baker, violent God, and merciful God. Baker introduced me to the two images, but then she just started carrying the conversation with merciful God and me. And she acted like violent God was not even in the room. Yet there he sat, nibbling his biscuits, sipping his tea, and occasionally gazing out the window. Time passed, minute by minute, but still she wouldn’t invite him into the conversation. He was simply being shut out of meaningful discussion, and everybody knew it.