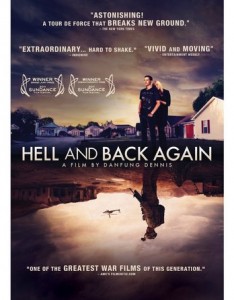 The other day I watched the Academy Award nominated 2011 documentary “Hell and Back Again”. The film was directed by Danfung Dennis and follows a soldier in Afghanistan who is severely wounded in battle and then has to reintegrate to civilian life.

Dennis does an amazing job of capturing incredible and shocking footage from his time as an embedded reporter, and then weaving it into a story that feels more like a traditional drama than a documentary. As I watched the film I reflected on how much it felt like “The Hurt Locker,” a drama made with the riveting intensity of a documentary.

In some respects I suspect it is Dennis’ very success at making this such a seamless film that kept me at an emotional distance from it. The footage was so well done, and so expertly edited into the storyline of one soldier’s difficult reintegration into society, that it didn’t feel as real as it was.

But I suspect there was a deeper problem that kept me from identifying more closely with the film. To put it bluntly, I’ve simply reached my saturation point for watching war documentaries, particularly those centered on Afghanistan and Iraq. I’ve watched “Iraq in Fragments,” “Gunner Palace,” “Body of War” (which I reviewed here), “Control Room,” “Taxi to the Dark Side” (my personal favorite), and several more besides. Every one of those documentaries was good, and some of them were great. But there are only so many documentaries one can watch.

I also find myself somewhat conflicted about war documentaries. In my cynical moments I feel almost that wars are undertaken so that documentaries can be made about them. The documentaries help us channel our national pride, our rage, our dissatisfaction with the state of the world. They also provide first rate source material for those interested in making documentaries.

In one scene the soldier rolls into Walmart in a wheelchair. He then begins to describe his injuries to a kindly Walmart greeter. Afterwards she asks if she can give him a hug. In one sense it is an emotionally evolving scene. Like others in the audience, I feel the impulse to line up behind that greeter to give the hero an appreciative hug for acts of bravery and valor.

And yet at the same time I find myself reacting negatively to the scene. It feels like a trope. I’ve witnessed it before in other documentaries, in countless public interest stories in the news, in national holiday events, and in the iconic images of war like the flag raising on Mt. Suribachi. In that moment the documentary which, in its best moments is supposed to be subversive of war-mongering, becomes but one more voice in the ceaseless cacophany.

And then I worry. Are there aimless youth out there searching for emotional depth and meaning who can be moved by this scene and end up themselves as sacrifices for the irresponsible foreign policy decisions of bureaucrats driven by various vested interests? In other words, to what extent does a fiercely emotional documentary like this become part of the problem?

While it undoubtedly is fiercely emotional for some viewers, even as I finished the film I found its overly familiar images slipping away, merging into the blur of iconic images drawn from other dusty middle east war documentaries. It would seem that like the hard baked earth of a dusty road in Iraq, I’ve been over exposed, my emotions spent.

Whether or not society has seen enough war documentaries, I don’t know. But I know that I have.