This is a repost of an article I published in 2010 at The Christian Post (with two tweaks). 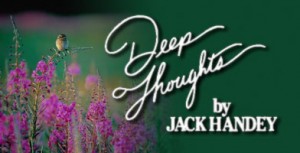 We live in a Dr. Phil world.

It is a world in which deeply scarred, dysfunctional people can receive five minutes of counsel delivered with a Texas drawl, and supposedly be well on the road to recovery: “Y’all need to learn to forgive.” Yes, turning around deeply entrenched patterns of thought and behavior is just that easy.

Or so the producers would like us to think.

Of course this didn’t start with Dr. Phil. Indeed, the program is but one more manifestation of a culture of instant gratification, immediate payoff, and a complete lack of depth.

As you can imagine, the Christian faith with its Lenten fasts, spiritual disciplines, and daily shouldering of one’s cross fits rather poorly into this new world. It is much easier to seek “spirituality” and the “inspirational”.

The natural end of this process is a poster that features a quote from Jesus (or Buddha, or Tony Robbins) set against the serene backdrop of a waterfall (or sunset, or rainbow). Ahh yes, the spiritual life reduced to an inspirational poster for your office wall.

Twenty years ago, Saturday Night Live blazed the trail of mocking this shallow inspiration industry with “Deep Thoughts … by Jack Handey.” Here are a few choice gems, drawn from my copy of Deep Thoughts: Inspiration for the Uninspired (New York: Berkeley Books, 1992), a fine little collection which is fortunately still in print:

“A man doesn’t automatically get my respect. He has to get down in the dirt and beg for it.”

“The face of a child can say it all, especially the mouth part of the face.”

“You know what would make a good story? Something about a clown who makes people happy, but inside he’s real sad. Also, he has severe diarrhea.”

There’s no point to Jack Handey’s inspirational thoughts, of course. But the incongruities they introduce (a clown that’s real sad, and has severe diarrhea), at least have a modest humorous payoff.

More importantly, the vacuity of Jack Handey’s thoughts reminds us that a profound and meaningful life does not come by digesting a self-important sentence or two delivered in a suitably “serene” setting. Rather, it comes through a long, at times bewildering and often painful process of education, formation and discipleship.

So  while the 5-Minute New Testament (Tyndale House, 2000) may have seemed like a good idea at the time, how about in the Lenten time that remains we refuse to rush, commodify, or trivialize the things that matter most?

Or we could just keep reading Jack Handey who observed with pseudo-profundity: