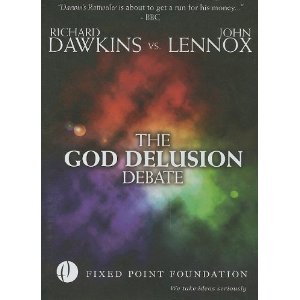 Yesterday I finished leading three weeks of adult Sunday school based on the film “The God Delusion Debate”, a dialogue/debate between Richard Dawkins and John Lennox. Overall it was an engaging dialogue and Lennox made some good points. He also had what was undoubtedly the best line of the event. After the moderator quoted Dawkins appealing to John Lennon (“Imagine there’s no heaven…”) Lennox responded that rather than listen to John Lennon he should now listen to John Lennox. (The second best line also belonged to Lennox when he asked Dawkins if he had faith in his wife.)

But Lennox stumbled at a few points, though I doubt many people in the room would have noticed. The two main quibbles I had with him concerned his comments on epistemology and cosmology.

The first problem came when Lennox responded to Dawkins’ anti-faith rhetoric by insisting that faith is based on evidence. This implies a type of evidentialism in which every proposition one rationally believes requires some evidence. But this quickly runs into problems. Consider a simple example.

You clearly had faith in the testimony of that passerby. But what evidence was the faith based on? After all, you’d never met the fellow before. Perhaps Lennox could reply like this:

“If I’m going to buy a used car I start it up and look it over. If it idles smoothly and there are no visible problems then that is evidence that the car is reliable. It may not be first-rate evidence, but it is evidence just the same. Well the same goes for testimony. The fact that the passerby appears reasonable and honest — everything seems to be running smoothly — provides evidence that he is trustworthy. Granted he could be a liar and the car could be a lemon. But in each case there is evidence on which faith is based.

The bottom line is that we can’t seek evidence for everything we believe. And any attempt to ground all our beliefs in evidence will end up defining evidence so broadly as to make the concept nearly meaningless.

Consequently it would be much better to say that in some cases it is proper to assent to the truth of a proposition even when there is no direct evidence for it. We need starting points from which we can begin to reason. These starting points are not indefeasible, they could be wrong, they are open to critical analysis. But we accept them unless we have a reason not to.

By presenting that kind of position Lennox would have an epistemology which is psychologically more defensible (i.e. it represents the way people actually reason), which does not render the concept of evidence vacuous, and which challenges Dawkins’ facile commentary on faith. Unfortunately he chose instead to take the lower road by accepting the same tacit commitment to unqualified evidentialism that is assumed by Dawkins.

The other big quibble I had came when Lennox argues for the authority of the Bible based on the alleged congruence of Genesis 1 and Big Bang cosmology. This attempt to equate “Let there be light” with T=0 strikes me as very naive. Imagine somebody defending the importance of “Little Red Cap” (the original Grimm’s version of “Little Red Riding Hood”). Out of one corner of their mouth they say “It is a German folktale and shouldn’t be read literally” and yet out of the other corner they point to an ancient red cloak that was discovered deep in the Black Forest as evidence for the text’s value. Which is it? Is “Little Red Cap” to be defended by identifying correlations with past history or not?

My point is not that the Bible is “just a folktale”. The point, rather, is that you have to be consistent to the genre of a text when you’re seeking to defend its value to others. To say that Genesis 1 is an ANE cosmogonic creation narrative which is a theological rather than scientific account of the universe, but then add that it ALSO is scientific here or there is to talk out of both corners of the mouth.

On this point Dawkins had the third best line of the evening when he pointed out that there are only two possibilities: either the universe had an origin a finite time ago or it didn’t. The fact that Genesis 1 may have got this right is thus no more noteworthy than calling a coin toss.

You can see an overview of the debate below: