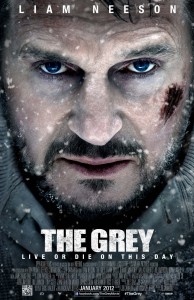 The moment I saw the trailer for “The Grey” I wept testosterone tears. Liam Neeson stranded in the Alaskan wilderness bare-knuckling it with rabid wolves? This made John Rambo’s escapades in “First Blood” look like “Kindergarten Cop” by comparison. But there were two other factors that drew me inexorably to the theatre.

Factor one: the Arctic and sub-Arctic. I have always been fascinated with the north since I read Pierre Berton’s The Mysterious North two decades ago. After reading that book I consumed multiple volumes on the north, dazzled by the cold, the wildness, the isolation.  The stories of early explorers like Samuel Hearne left be dumbfounded (would you climb inside a steaming muskox corpse to escape a coming blizzard?!) while the fate of the Franklin expedition staggered me.

Factor two: the wolves. I was equally fascinated by wolves growing up and I continue to believe the cry of the wolf is the most hauntingly beautiful sound in all nature. So imagine my delight when, as a child I discovered that my name means “Protected by wolves”. When I was a child I read much about wolves including Farley Mowat’s classic Never Cry Wolf, an important book that changed the way Canadians view the creature. Even if Mowat’s book turned out to contain a heady dose of fiction it still had more facts about wolves than the Grimms Fairy Tales that have formed the views of most people.

The premise of the film: Neeson plays a man named Ottway who is hired by an oil company in Alaska to kill wolves before they kill the rig workers. There is a scene near the beginning of the film where he stands with his sniper’s rifle and cooly shoots a massive wolf before it can pile into several workers.  At that point it is clear that the film is unapologetic in embracing the Grimms fantasy about wolves. I can forgive that. What you need to do is leave your PETA lifetime membership in the theatre parking lot and invoke your suspension of disbelief. Treat the story as a fantasy adventure.

The plane crashes. The macho survivors inexplicably decide to leave the crash site and wander into the wilderness while the wolves hunt them down with all the wicked determination of Sigourney Weaver’s aliens. Fine. I’m with you.

Somehow I had a harder time suspending my disbelief about the cold. It seemed like this screenplay was written by somebody who had never lived further north than Sacramento. So keep this in mind. The plane crashes in the Alaskan wilderness in the middle of winter. Okay, let’s put things in perspective. The average high in Fairbanks in January is -18 C ( 0 F) and the nighttime low is -28 C (-19 F). And keep in mind that Fairbanks is 450 feet above sea level.

Next, note that in the film one of the characters suffers and dies from hypoxia (altitude sickness). You would have to be above 10,000 ‘ (3000 m) for hypoxia to be a problem. Given the altitude there are two mountainous bands they could have been stranded in, one in the north of the state and the other in the south. When you consider their flying time prior to the crash it is highly likely they were in the south band, perhaps somewhere near Mount McKinley.

If it is averaging -18 C ( 0 F) in Fairbanks in the daytime you’d be looking at -40 (C/F) at the altitude where hypoxia would be a problem. Add in the fact that the winds are often howling in the film at near hurricane force and you could have a consistent wind chill of appoximately – 60 C (-76 F). At that temperature exposed skin (of which there was a lot in the film; even exposed fingers for extended periods of time!) would freeze in a couple minutes.

In short, this is complete baloney. Everyone would be dead in less time than it takes to watch a Seinfeld rerun.

As if that were not bad enough, verisimilitude is trampled further when, after a day’s journey, the three survivors are walking beside a gently moving river that has no ice, not even on the edges. In other words, the temperature seems to have risen inexplicably by at least 40 C. Now that’s what I call a warming trend.

That’s what happens when screenwriters write adventure stories about Alaska at a Starbucks in Santa Monica. It just doesn’t work.