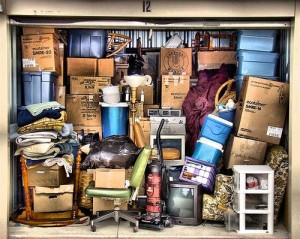 How do we explain this conservatism we have about certain beliefs?

In this article I’m going to define the phenomenon and give a simple illustration for how and why it functions.

This phenomenon brings us to what epistemologists refer to as the depth of ingression of a belief. Think of our beliefs as forming a sort of jumbled collection. The more deeply ingressed a belief is in your belief system, the more other beliefs are affected by the changing of that belief.

And now the storage locker takes the mainstage.

Imagine that you have a storage locker packed with a jumble of things. Your spouse comes to you and says “I need the red vacuum. Can you get it?”

No biggie. The red vacuum is at the very front of the locker. Removing it leaves almost all the other items unaffected. Consequently, you don’t need a great reason from your spouse to get the vacuum. “No problem!” you reply with a grin.

Later your spouse comes to you and says “Honey, can you get the box of blankets too?”

Wait a minute. The blankets are at the very back corner of the locker. In order to access them you’d have to spend an afternoon pulling things out. “Do you really need them?” you reply. “Can’t you buy some new blankets?”

The red vacuum is like a belief with a shallow ingression in your set of beliefs. You can change it quickly and without much evidence. For example, you may think the Honda Accord is the top car in its segment. But reading an article at Automobile Magazine comparing the Accord with the new Hyundai Sonata may be sufficient to convince you the Sonata is better. That’s because you can pull out the vacuum with little effort.

If, however, you’ve been driving Accords religiously for thirty years and you own a Honda dealership then it probably will take much more than a single article in Automobile Magazine to convince you that the Sonata is better. For you the belief that the Accord is top in its class is much more deeply ingressed into your system. It may not be way in the back with the box of blankets but neither is it at the front of the locker with the vacuum.

Now think about the belief that God does (or does not) exist. This, not surprisingly, is a very important basic belief for most people. For them it is ingressed deeply in the back of their beliefs in the equivalent place of the box of blankets. To change that belief would affect most of their other beliefs as well and consequently they are understandably reluctant to drop it. Consequently it would not likely take one article in Skeptic (or Christianity Today) magazine to persuade a person to change their views.

That is the case for most people, but clearly not for all. Some people gradually find that box of blankets working its way to the front of the locker through a long process of questioning their received opinions. By the time they read that article the box may have worked its way up beside the vacuum in which case a single article may be the final catalyst for removal of the belief in question.

So we should remember that people do not change their beliefs about matters deeply ingressed in their noetic structure for very good reasons. They may indeed be willing to remove the box of blankets eventually, but don’t be surprised if it takes awhile to do so.