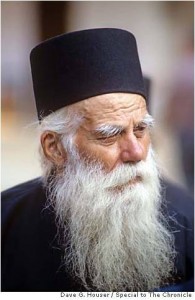 We are in the midst of Christian unity week, a time extending from January 18-25 when Christians around the world pray for unity.

Incidentally, did you hear that Fred Phelps and his tiny media darling Westboro Baptist Church (the infamous “God hates fags” church) will be participating this year? Since they believe they’re the only Christians on the planet they’ll be holding a church BBQ. And no, the local gay episcopalian priest is not invited. Though they do have a representative sausage to burn in effigy.

But seriously folks, on such a fine week as this where we seek to unify Christians what is it exactly that we are seeking to unify? What does this impressive looking Eastern Orthodox monk (does Santa Claus spend the off season at Mt. Athos?) share with the tattoo-covered metal core idol Tim Lambesis (pictured below)? What is it that unifies Christians?

I’ll tell you this much: it sure ain’t the facial hair. Nor is it the politics or culture or ethics or even a sports team.

Easily enough done. However, what does it mean to check “JC”? How right does a person’s understanding of Jesus have to be to warrant inclusion? What are the deal-breaking errors? Some of them are mercifully obvious. For example a straight denial of Jesus’ divinity would warrant the boot. But what about a person who is 50% sure Jesus was divine? Or a person who is 100% sure Jesus is divine but who fellowships with a person who believes Jesus was not?

Would the monk be satisfied with Tim Lambesis’s christology? Has Tim Lambesis signed up for the Chalcedonian definition? Is he expected to? Would Tim call the monk a monophysite? Would he be right? And would it matter?

A couple days ago I had a discussion with my daughter to begin explaining the history of the Protestant Reformation. The next morning to test her I asked her what Protestants are. Her response came swiftly: “They fight Catholics!” 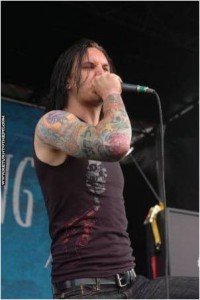 Several years ago theologian Bruce Marshall wrote an interesting article in First Things called “Who cares about Christian unity?” It it he pointed out that Paul’s sober argument in Romans 9-11 leaves it open that Christian communities could be grafted out of God’s plans if they are unfaithful. And one way to judge if that may have happened is in the absence of the fruit of unity within Christian communities.

But this places us in something of a vicious circle. On the one hand we are found to be genuine Christians in virtue of our unity with other Christians. On the other hand, before we find unity it would seem we need to have a set of criteria defining the group we must find unity with. Should we find unity with the Greek monk on Mt. Athos? What about the tattooed lead singer of As I Lay Dying? What about the hate-filled lead pastor of a cultic independent church? Admittedly it might be hard if he starts pelting you with hotdogs the minute you walk on the church lawn. But does that mean you shouldn’t try?

The dilemma feels like trying to win the easter egg hunt when you’re not sure what qualifies as an easter egg and thus what to put in your basket.