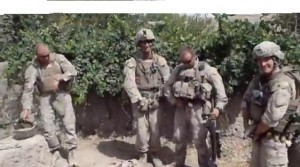 A couple days ago a forty second video went viral depicting US soldiers urinating on the corpses of dead Taliban soldiers in Afghanistan. President Karzai has just condemned the video. Since then at least two of the soldiers have been identified by the Pentagon.

I take the event of urinating on dead soldiers to be an example of an EMA, an evil militaristic act. When EMAs surface in a war they tend to elicit one of two extreme responses.

Vindication. The first response is to offer a vindication of the soldiers and to count them heroes. Indeed there seems to be a sort of corollary relationship here: the more the soldiers are censured in some quarters the more forcefully they are vindicated in others. This was certainly the case during Vietnam when William Calley led his soldiers in the massacre of five hundred Vietnamese civilians at My Lai. After his actions came to light many people counted him a hero (albeit not many Vietnamese people).

This latest EMA has attracted its own defenders as one will find when visiting the footage posting on youtube. The first thing one notices is the list of views (at 76,525 for the video I viewed). Next one notices that the video has 168 likes. Admittedly that is a bit ambiguous. Do people like the video as in do they think the EMA is admirable? Or do they like that a heinous act has been exposed? Some likes may be the latter, but many are definitely the former as is clear by some of the comments people wrote which include statements like “Piss on them!” and “God’s finest fighters pissing on pieces of shit.” and “Piss on more of them maybe they’ll learn there [sic] lesson!”. Some people describe the scene with the same kind of unrestrained enthusiasm that is typically reserved for the Iwo Jima War Memorial.

Vilification. As of my viewing the video had garnered 369 dislikes and the comment section reflected this with the marjority of comments unequivocally condemning the actions of these soldiers. But at this point the narrative of vilification often kicks in with people explaining that these soldiers were “a few bad apples” and “not true Americans” and “sick sociopaths”.

The truth, however, is much more disturbing.

Two weeks ago Benjamin Colton Barnes, an Iraq war vet, shot four people at a party in the Seattle area before he drove out to Mt. Rainier National Park and shot and killed a park ranger at point blank range. Barnes wasn’t just a bad apple or a sociopath. He was an individual suffering from PTSD who was brutalized in combat and went on to brutalize others.

You can’t hire a guy to work 9-5 in a slaughterhouse and not expect that to affect how he interacts with animals during his volunteer time at the Humane Society. The same principle applies in war. People can only sustain the cognitive dissonance introduced by combat situations for so long before it bleeds into the rest of their character. The history of war is littered with victorious soldiers slaughtering, raping, eating and urinating on defeated soldiers. (Yes, eating too. Cannibalism is more common in combat than you probably realized.) As horrific as these actions may be they are explicable as defense mechanisms which serve to rationalize and legitimate the actions of killing others. The more degraded the enemy, the easier it is to kill them.

We see the physical casualties of war. Young people returning from battle missing limbs, for example, provides a great visual symbol of valor for the patriotic parade. The moral casualties are not so obvious. We can see people who lost their arm, but we don’t always see those who lost their soul.

Economist Joe Stiglitz famously estimated the cost of the Iraq War at 3 trillion dollars. Obviously he only counted what it is possible for an economist to count. What was the cost to Benjamin Colton Barnes who was transformed into a sociopath on a murderous rampage, and to the four soldiers who degraded themselves to the point of thinking that urinating on a corpse is a Kodak moment? And what is the cost to their many victims?

Until we learn how to factor the loss of soul into our calculations we will never fathom the true cost of war.

For further reflection see my review of the film “Body of War“.