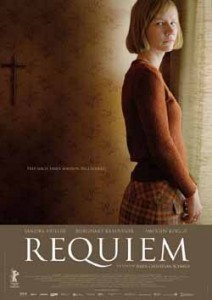 Anneliese Michel was a young German Catholic who reported being tormented by demons. Initially she reported hearing demonic voices telling her that she would be damned. But it didn’t stop there as her behavior became increasingly bizarre: she reportedly ate pieces of coal and spiders and sunk into a world of depression and paranoid delusion. Then, after attempts at psychiatric treatment failed to alleviate her symptoms, she was subjected to a series of exorcisms over a period of months between 1975 and 1976. They too were unsuccessful as Michel died on July 1, 1976. The autopsy identified malnutrition and dehydration as the cause of death. At this point the story moved from tragic to sensational as the state prosecuted two Catholic priests and Michel’s parents for negligence. All four were found guilty and sentenced to prison terms of several months.

Two films have been made about the tragic Michel story. The more familiar will probably be “The Exorcism of Emily Rose”, a very loose remake that plops the story down into middle America and frontloads all sorts of sensational special effects. That film is definitely worth a watch. But the lesser known German film “Requiem” stays much closer to Michel’s actual story and is a far superior film. No Hollywood special effects here, but there is an extraordinary performance by Sandra Hüller as Anneliese. And even if the film leaves into doubt whether demons were at play, or whether the real demons were the psychotic fractures deep in Anneliese’s own mind, the film is no less disturbing. With a subtlety and depth that escapes many a lesser film, “Requiem” unsettles the audience with an unforgettable collision of worldviews centered on one tormented young life.