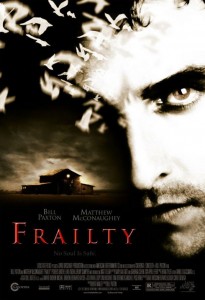 Looking for a good film to watch this weekend? You certainly could do worse than Bill Paxton’s highly underrated 2001 film “Frailty.” The film tells the story of Mr. Mieks (played by Bill Paxton) and his two sons. One day he receives a visit from an angel (or so he thinks anyway) who informs him that the end of the world is coming and demons disguised as human beings are walking in our midst. The angel then commissions Mieks to go out and be the crusader who dispatches these indistinguishable-from-people-demons. Mieks faithfully goes out, finds a good sized axe, and gets to work.

As you watch the film ask yourself: what would I do if I had Mr. Mieks’ experience? Would I also take up an axe and get to work? If not, why not?

One of the best aspects of the movie is the ambiguity that Paxton weaves into the storyline. In short, he provides enough hints that supernatural forces were involved to leave unresolved the matter of whether Mieks was a murderous monster or a “knight of faith”.