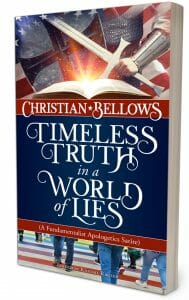 In November 2022, I published my fifteenth book, a satire of religious fundamentalism titled Christian Bellows Timeless Truth in a World of Lies. Mr. Bellows describes himself as an “Independent Bible Church Pastor, Unaccredited Bible College President, World-Reknowned Biblical Scientist, and the Apologist of the Great Plains.”

Since the book was released, I have been trying to get Mr. Bellows to agree to an interview on my website but he has been resistant to do so … until now. On January 5, he emailed me and stated that while he was doing his morning devotions he reflected on how Daniel was faithful in Babylon and he decided that he could likewise be faithful in an interview on my “Babylon liberal website.” One caveat: Mr. Bellows included the condition that in the print interview he be referred to as “The Rev. Dr. Bellows.”

Here is our conversation.

Randal: Thank you for agreeing to speak with me, Rev. Dr. Bellows.

Randal: So let’s jump right in then. You refer to yourself as a “Biblical scientist.” What is that, exactly?

The Rev. Dr. Bellows: The Bible is God’s truth and it follows that all truth is in the Bible. That includes the truths of nature. Whatever secular scientists want to tell you about nature is already present in seminal form in God’s Word. That’s why every time there is a scientific discovery, we learn that it was already anticipated in the Bible. As a biblical scientist, I seek to advance the cause of science and our understanding of nature through the careful interpretation of God’s Word. 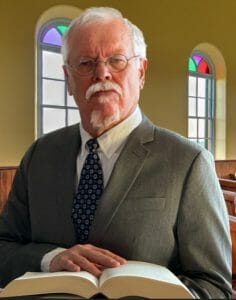 Randal: You said all truths of nature are present in the Bible, but I’m not sure how you justify that claim. For example, where in the Bible is there a “seminal form” anticipation of the mRNA vaccines that were developed to fight COVID-19 by teaching human cells to make a protein that triggers an immune response?

The Rev. Dr. Bellows: Your so-called “vaccines” do not work. That’s junk science. I saw an excellent video on Facebook explaining how they don’t work and they actually cause increased rates of death.

Randal: If all scientific truths are present in the Bible in “seminal form” then shouldn’t you be able to tell that mRNA vaccines are “junk science” from the Bible rather than a Facebook video?

The Rev. Dr. Bellows: Exodus 15:26, sir. Have you not read the Word? “I will put none of these diseases upon thee, which I have brought upon the Egyptians: for I am the Lord that healeth thee.”

The Rev. Dr. Bellows: Liberals like yourself always say that quoting God’s Word as our guide is proof-texting because you don’t uphold the authority of the Word of God. You’d rather listen to corrupt godless government agencies like the CDC and Dr. Fauci. He should be in prison! 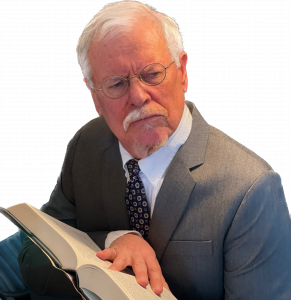 Randal: I don’t think misquoting the Bible is upholding the authority of the Bible, that’s all.

The Rev. Dr. Bellows: God’s Word says he heals us from disease and infirmity. I do not live in fear, liberal. Do you?

Randal: You’ve called me a “liberal” a few times now. What do you mean by that?

The Rev. Dr. Bellows: You clearly reject the authority of God’s Word in all matters of life. You’re a culture-compromiser.

Randal: What does it mean to be a culture-compromiser?

The Rev. Dr. Bellows: It means you distort God’s Word to try to make it more palatable to a secular, God-hating world. But God is not mocked. You even wrote a book defending so-called “progressive” Christianity. Apparently, you think we need to improve on the biblical Christanity God gave us.

Randal: That’s not what “progressive Christianity” means. The whole idea is that our understanding of Christianity is always imperfect and needs to adapt and change. For example, I would say that which you call “biblical Christianity” is itself a product of conservative fundamentalist American Republican culture.

Randal: But this is precisely the problem. For example, you conflate Christian identity with the Republican political party.

The Rev. Dr. Bellows: So what other party do you “conflate” Christianity with? The pro-abortion Demoncrats?

Randal: I have no political affiliation. But I don’t think it is very Christian to call Democrats demon-crats.

The Rev. Dr. Bellows: Let me guess, you also probably don’t think Jesus was very “Christian” when he called false teachers blind guides and white-washed tombs and children of the devil. That’s because you have a liberal hippy Jesus, not the biblical one.

Randal: Perhaps we can talk about the book. How has Timeless Truth in a World of Lies been received?

The Rev. Dr. Bellows: The book is excellent. Elder Jeremiah Schmidt, a godly man from Standing on the Word Independent Bible Church endorsed it as the greatest work since Pilgrim’s Progress. But I must be candid with you, sir. Your adversarial, confrontational line of questioning has only reinforced to me that your heart is hardened to the Word. I believe it is time to end this interview.

Randal: I’m sorry to hear that Rev. Dr. Bellows. But thank you for joining me.

At this point, I heard a loud click that sounded like an old school rotary phone being hung up. And that was the end of our interview.