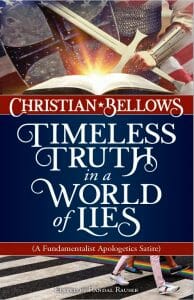 If you think a big bang without a banger is crazy, you’d be right. But that’s just the beginning of the nonsensical doctrines of atheist faith. Their next lie just might be even crazier.

To set this one up, I need to tell a story. When I was a young boy living on the farm in Nebraska, a tornado skitted across our land one year and slammed into an old barn at the edge of our property. (Father explained to us later that God had sent that tornado as a judgment because Mother had imbibed a glass of wine one afternoon while attending the women’s knitting club and she had tried to keep it as a secret from Father. But he found out because one of the other ladies in the club was a God-fearer who told him of Mother’s sin. Needless to say, Mother never did that again!)

For years, Father had used that barn to store old tractor parts. After the storm had passed, we walked out to survey the damage. Sure enough, the barn had been torn to pieces and there were tractor parts strewn every which way across the property.

But what if I told you that instead of finding a mess of parts strewn all over the yard, I found a perfectly assembled International Harvester tractor filled up with gas and ready to go, sitting in the dirt hole where the barn had been? Would you have believed me? Of course not. And the reason is simple: tornadoes don’t assemble tractors! Instead, they just make a big mess. Kind of like the way Professor Smarty Pants made a big mess trying to defend his “big bang.”

Well, if you think the idea of a tractor being assembled by a tornado is a tall tale, have I got a story for you! Everywhere you look in God’s creation, there are machines that are far more complicated than an old International Harvester tractor. Just look out at our world with all the eyes and hearts and brains and ears! The evolutionist wants you to think that all these amazing things were created by evolution. That’s like thousands and thousands of International Harvester tractors all being perfectly assembled by one very busy tornado! Now, does make sense to you? Or does that sound silly? It’s darned crazy, I’d say!

So, if evolution can’t make all the eyes and hearts and brains and ears any more than a tornado can make a tractor, then where did they come from? There is only one answer that makes sense: they were made by a designer, a mind put all the pieces together, fitting them perfectly to work as one.

And who is that designer?

Allow me to introduce you to Him. You see, He’s a friend of mine. In fact, He’s my heavenly Father. When I was but a babe in the womb, He made my eyes and heart and brain and ears and He knit them all together, for He “hast covered me in my mother’s womb” (Psalm 139:13) and “I am fearfully and wonderfully made” (139:14)

And the Lord didn’t just make me. He made you too, brother! Now I ask you: will you bend the knee and praise Him for His handiwork? Or like a stubborn fool are you going to shake your fist at him and say that a tornado of chance put you all together?