Today, I received the following comment in response to a YouTube video in which I critique Sean McDowell’s misinformation about progressive Christians.

The comment sounds like a string of talking points from conservative evangelicals like Alisa Childers, Mike Winger, and Sean McDowell. To begin with, the comment offers an absolute binary judgment in which progressive Christianity offers no truth at all: it is wholly “empty of any substance,” “void of any virtue,” a “dead faith” that is “good for nobody.”

Such comments are disturbing enough. But what most disturbs me is the next part in which this man then goes on to claim that progressive Christianity is “spiritually abusive” and perpetuated by people who are “openly lying”.

The important thing to recognize is that this bizarre, ignorant, and deeply disturbing diatribe is a predictable product of the dangerous teaching regularly produced by the likes of people like Childers, Winger, and McDowell. Not only do these teachers regularly claim that progressive Christianity is a completely different religion from “historic Christianity,” but they also go on to make truly outrageous claims that progressive Christians, as a group, are malicious liars and deceivers.

Childers is especially egregious in this regard. Consider this excerpt from her execrable book Another Gospel? in which she describes progressive Christian pastors as evil predatory wolves who want only to kill and eat “juicy sheep steak”: 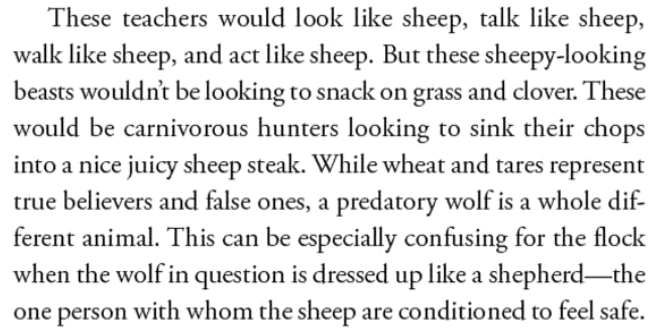 McDowell’s schtick is more subtle than that. He acts as if he is interested in charitable conversation. See, for example, his video “Progressive vs. Evangelical: A Dialogue for Clarity.” However, time and again McDowell distorts and misrepresents the views of progressive Christians. And he is one of the most avid promoters of the noxious falsehood that progressive Christianity is another religion.

While McDowell may be subtler than Childers, he still makes the same basic claim of imputing wicked and deceptive malice to progressive Christians. Consider, for example, this thumbnail for his recent interview of Michael Kruger, which refers to “10 Half-Truths of Progressive Christianity.” 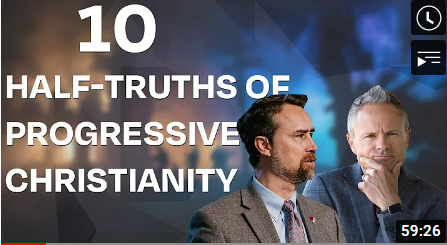 Note that the term “half-truth” means not merely partially true and partially false. Rather, it is a term that alludes to deceptive intent on behalf of a speaker: “a statement that is only partly true, especially one intended to deceive, evade blame, or the like.” (source) By accusing progressive Christians of “half-truths” McDowell is perpetuating the falsehood that progressive Christians actively withhold information and seek to deceive other Christians. In short, while he may be subtler in presentation, McDowell is still making fundamentally the same claim as Childers.

I have little doubt that the man who posted that hateful, ignorant screed on my YouTube channel has been intellectually and spiritually malformed by the teaching of people like Childers, Winger, and McDowell. These people are building their ministry profiles by producing a steady diet of profoundly spiritually damaging misinformation about brothers and sisters in Christ in videos and podcasts and books and interviews. It is utterly reprehensible behavior and only serves further to divide the church and damage the cause of Christ.