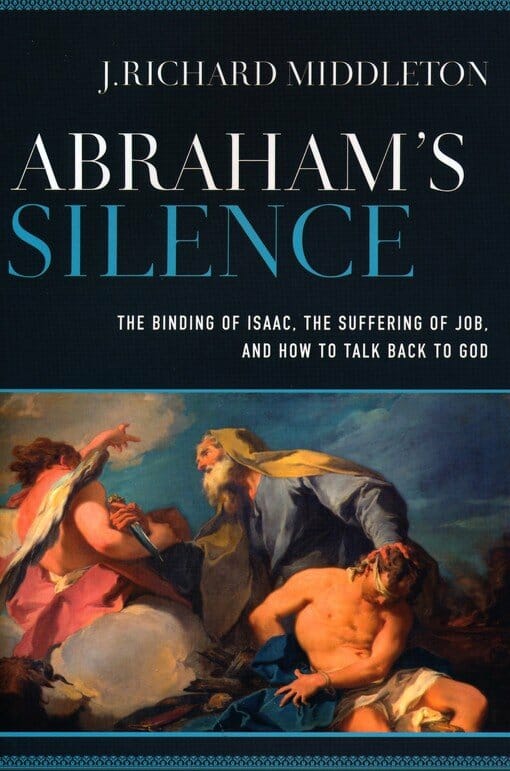 J. Richard Middleton. Abraham’s Silence: The Binding of Isaac, the Suffering of Job, and How to Talk Back to God. Baker Academic, 2021.

The binding (Aqedah) of Isaac is one of the most troubling stories in all Scripture. And it is not hard to see why. The story depicts God commanding a father to butcher his own son and then praising the father for his willingness to do so. Granted, God intervenes in the last minute, but the fact remains that Abraham is commended for his willingness to carry out the act in faith. And so we ask, how can willingness to commit a moral atrocity ever be a praiseworthy action?

Needless to say, the challenge of the story is not merely theoretical. In 2004, suburban Dallas housewife Dena Schlosser amputated the arms of her infant buoyed on by the conviction that God wanted the child as an offering. We all agree that Schlosser’s belief was a pious delusion. But if God truly commanded Abraham to kill Isaac, can we be so sure? Within the world of the Aqedah, might we not commend Schlosser as a hero of faith in the vein of Abraham? And yet, her actions are monstrous, not praiseworthy.

In Abraham’s Silence, J. Richard Middleton offers an audacious treatment of the problem of the Aqedah. Underlying his approach is a deep moral sense in the intrinsic wrongness of violent actions like child sacrifice:  “I simply do not believe the God I have come to know would ever want me to sacrifice the life of another as proof of faithfulness; nor do I believe that this God values blind, unquestioning compliance.” (132). This moral conviction guides Middleton’s search for an alternative reading of the binding of Isaac that does not elevate Abraham as an exemplar of faithfuless.

While intuitions about the nature of God and the good and right inform Middleton’s engagement with the text, his methodology is thoroughly rooted in a peshat reading (that is, careful exegesis) of the text. He argues that when we read Genesis 22 informed by the backdrop of vigorous biblical prayer (e.g. the Psalmist), Job’s bold engagement with God, and attendant to cues within the Genesis text itself, we can see that rather than valorizing Abraham as an exemplar of faith, Genesis 22 takes a critical stance of Abraham’s silent acquiescence to the divine will. In short, Abraham should have challenged God and interceded on behalf of his son rather than remain silent.

The argument proceeds in three stages. In part 1 (chapters 1-2) Middleton introduces the problem of suffering and the limitations of theodicy whilst citing the boldness of the Psalmist as a model of vigorous prayer in light of the world’s suffering. In part 2 (chapters 3-4), he turns to the book of Job based on the close ties between Job and Abraham (one scholar highlights the literary interconnections between these two figures by coining the term “Jobraham” (9)). According to Middleton, we should read Job as exploring the question of appropriate speech about God in the face of suffering. On this account, God’s speeches at the end should not be read as rebukes of Job but rather commendations of his spirited push back at the circumstances to which he’s been subjected.

The Job example lays the foundation for part 3 (chapters 5-7) where Middleton argues that Genesis 22 views Abraham’s failure to question God and intercede on behalf of his son as a failure. He includes multiple points in his reading. For example, Middleton notes that Abraham had previously interceded on behalf of Sodom (Genesis 18) and God had shown himself only too willing to meet every one of Abraham’s demands. By contrast, it is striking that he makes no commensurate attempt to save his son. Instead, Abraham remains singularly focused on the task, so focused that the angel needs to call twice to get him to stop (219). In addition, the fact that Abraham never noticed the ram caught in the thicket suggests that “Abraham did not even bother to investigate whether God had provided a substitute” (221-22). Consequently, Middleton concludes: “I am inclined to think that Abraham did not pass the test in Genesis 22. His silent obedience indicated that he did not discern God’s merciful character (until the angel called off the sacrifice); and he did not show love for his son by interceding on his behalf.” (223)

The consequences of Abraham’s failure to challenge the divine command are significant. For example, Middleton identifies cues in the text that suggest Abraham and Isaac had no further interaction after this fateful day. In addition, Middleton cites evidence that Abraham may have become estranged from Sarah. In short, his failure to challenge the divine command had a deeply deleterious impact upon his family.

Middleton concludes the book with a reflection on “The Gritty Spirituality of Lament” as churches need to (re)discover the spiritual depth of a prophetic engagement with the God we worship, one that embraces doubt, questions, and protest as part of the spiritual life.

I have three primary criticisms of the book. My first criticism is concerned with Middleton’s negative take on theodicy (and in particular, greater goods theodicy) in chapter 1. To begin with, he argues that greater goods theodicy “could … generate ethical paralysis” because whatever evils occur are purposed for a greater good (23). I think this is a misguided concern for there is no inconsistency between recognizing that we have a moral obligation to do good and prevent evil while simultaneously recognizing that God brings greater goods out of those instances where we fail to do so.

Middleton also claims that C.S. Lewis came to repudiate his theodicy in The Problem of Pain when he wrote A Grief Observed following the death of his wife (24-25). I think this is a misreading. The lesson here is not that Lewis repudiated his greater gooods theodicy but rather that he came to appreciate the limited nature of its application: theodicies seek to address the intellectual problem of evil, not provide pastoral comfort. With that in mind, I do not agree with Irving Greenberg’s famous declaration (which Middleton affirms): “No statement, theological or otherwise, should be made that would not be credible in the presence of the burning children.” (31) In short, this is an unreasonable standard. And ironically, Middleton provides the basis to recognize that fact, for he points out that you should probably not recite Psalm 150 (a praise psalm) to a survivor of a terrible accident (19). But the fact that you would not pray a psalm of praise in front of an accident victim (or burning children) does not entail that you would never pray a psalm of praise. The same goes for theodicies.

My second criticism: Abraham’s Silence left me wondering how Middleton would address the commendation of Abraham’s actions in Hebrews 11:17-19. While he does address the text, his treatment is limited to a footnote where Middleton notes that Abraham’s actions were commended alongside Jephthah’s and “this is clearly based on extra-biblical tradition….” (214, n. 59) This seems to suggest that Middleton is saying we ought to reject the perspective of the author of Hebrews on valorizing Jephthah and Abraham. This all-too-brief and suggestive comment left me wanting to hearing more on how Middleton’s reading would affect the interpretation of Hebrews 11 and the New Testament more generally.

These criticisms notwithstanding, Abraham’s Silence is an excellent book, meticulously researched, clearly written, with a thoughtful defense of a bold and important thesis. I believe Middleton is fundamentally correct in affirming the central spirituality of lament and pious prophetic challenge in the life of faith. And I particularly resonated with the book given that it dovetails beautifully with my project in Jesus Loves Canaanites including the role of moral intuition in theological reasoning and the piety in the prophetic stance of disagreement. I highly recommend you pick up your own copy of Abraham’s Silence here.

Thanks to Baker Academic for providing a review copy of the book.