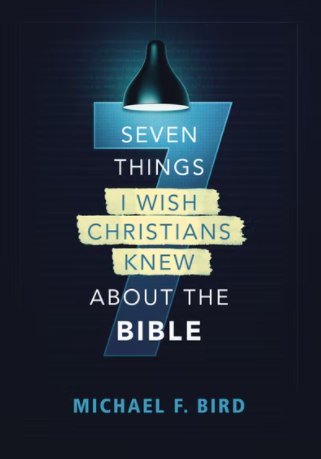 Michael Bird. Seven Things I Wish Every Christian Knew About the Bible. Zondervan, 2021.

Seven Things is an introduction to the Bible written by Anglican priest and New Testament scholar Michael Bird. The book is written in seven chapters addressing origins (chapter 1), inspiration and inerrancy (chapter 2), authority (chapter 3), the cultural distance between the biblical world(s) and our own (chapter 4), basic rules of interpretation (chapter 5), the key purpose of Scripture as cultivating love of God and neighbor (chapter 6), and the christocentric and christotelic nature of the text: i.e. it’s all about Jesus (chapter 7).

Bird makes an effort to write in an engaging and humorous manner that will keep the attention of the lay reader. For example, when discussing the complex process of canon recognition, he observes, “No one was walking around with an inspiration-0-meter collecting books that measured a high reading.” (24-5) The light-hearted tone of the book is a definite bonus for those aiming for a pithy, engaging text for a general readership.

Not only is the book accessibly written, but in terms of theological orientation it strikes an admirable balance between the extremes of fundamentalists like Wayne Grudem and liberals like John Shelby Spong. Bird’s scholarship represents an intellectually engaged, historically sourced, evangelical approach to the Bible reminiscent of Scot McKnight’s Blue Parakeet and N.T. Wright’s Scripture and the Authority of God.

In my opinion, the book is strongest when it pushes back at the more reactionary and anti-intellectual tendencies of conservative evangelicalism. Consider, for example, Bird’s defense of Mike Licona against the frenetic fundamentalists (56-7) and his critique of the tribalistic way that “inerrancy” is used as a boundary marker for insider/outsider: “For many American evangelicals, inerrancy is kind of like your passport and residency visa within the evangelical tribe; without it, you can expect to get deported.” (59)

While Bird offers criticisms of both sides, it seems to me that he is decidedly less generous when addressing the theological liberals. For example, he cites a tweet from the Union Seminary Twitter account which states that the Bible was “written by men over centuries and thus reflects both God’s truth and human sin and prejudice.” While there is much that I would disagree with when it comes to Union Seminary’s Twitter account, it seems to me that this is a serious tweet worthy of thoughtful reflection. While I discuss this theme at length in Jesus Loves Canaanites, here I’ll just cite as an example C.S. Lewis’ famous comments on the imprecatory psalms: “we must not either try to explain them away or to yield for one moment to the idea that, because it comes in the Bible, all this vindictive hatred must somehow be good and pious.” But perhaps that’s the point: the human sin and prejudice to be found within the text is a feature, not a bug. The point is not to balk at the presence of sin and prejudice in the text but rather to call it out and learn from it, recognizing that there is a reason for it consistent with the christocentric and christotelic purposes of Scripture.

Bird doesn’t consider such a charitable and nuanced engagement with Union’s provocative perspective. Instead, he offers the following “translation” of the tweet: “we can identify the divine bits of the Bible and the oppressive bits that are products of capitalist, patriarchal, heteronormative, racist Zionist, and alt-right evil. No one else in church history was able to do this before us….” (71) Given how much Bird himself recognizes the moral challenges with the biblical text, this snarky description seems unnecessarily hostile and dismissive, like a bit of red meat for the conservative evangelical reader.

Bird defends a dynamic theory of inspiration (i.e. God inspires propositional content but not the specific words through which that content is written). While I find an appropriation model to be much better, what really caught my attention was the following argument he gives in favor of the dynamic view. He writes, “If inspiration applies to the original words of the Hebrew, Aramaic, and Greek, then it means that those words alone are the divine revelation. That would inescapably mean that our English Bibles are not the actual words of God, but a mere translation of them into English.” By contrast, “if we regard inspiration as pertaining to God implanting ideas into the minds of human authors, rather than giving them actual words, then translations which express the same ideas and convey the same knowledge can be regarded as genuine expressions of God’s word.” (51) The clear implication is that Bird seems to think that on his view, Bible translations can, in principle be divine revelation rather than imperfect translations of that revelation. And this is an advantage for the theory.

I have several concerns with this argument but lest I get off on a tangent (after all, this whole discussion is less than a page) I’ll note just one here: Bird’s argument actually adds anything. Put it this way: which Bible translations are successfully accurate and precise that they are themselves revelation? That question is easily answered if you are a KJV-only fundamentalist, but I can’t imagine a Bible scholar like Bird saying that any translation is, in fact, divine revelation by that standard. And if he concedes that Bible translations are all imperfect accounts of the original words, then we are functionally in the same place as with other theories of inspiration.

I noted earlier in this review that Bird sarcastically dismisses a Union Seminary tweet when I think he’d do far better to consider it closely. One of the places where I think he fails in this regard is when it comes to the genocidal violence in passages like Deuteronomy 7 and 20, Numbers 31, Joshua 6, and 1 Samuel 15. This is how Bird addresses these profoundly disturbing texts: “When we read the texts about war—including rhetorical tirades to show hostile tribes ‘no mercy’ and the permissibility of taking women as captives—we need to imagine this God putting on a hazmat suit and trying to lead Israel through the toxic morass of human evil and taking them, incrementally, toward a better way of being human.” (83)

Here’s my question: how is this hazmat suit metaphor supposed to be cashed out? One interpretation would have it that the ancient peoples are the toxin and God is donning the hazmat suit to enter history and protect the Israelites from their taint. Of course, this is the same kind of rhetoric that has been invoked to justify genocides throughout history and it looks no better here than it does in the mouths of any historical genocidaires.

A second interpretation sees the hazmat suit as God accommodating to errant moral perspectives. This is what Christopher Wright proposes in The God I Don’t Understand: God reveals himself through the appalling immorality of ancient peoples such as the Yahweh war that involved the eradication and enslavement of civilian populations because that’s just how war was done back then. This reading proposes that God’s aim was to accommodate to this error so as to lead the Israelites incrementally toward a better way of living. Thus, God accommodated to the errant morality that slaughtered infants (e.g. 1 Samuel 15) and enslaved virgin girls for soldiers (e.g. Numbers 31) because this was the best way to move the Israelites to a more correct moral understanding.

Needless to say, this is not a good argument and we can easily illustrate the problems with it as follows. Among the other common practices of war in history are the gang rape and cannibalism of defeated soldiers. Could God have accommodated to those practices by commanding that defeated soldiers be raped and eaten? If so, then the Christian truly has no moral limits on what God can command through accommodation. If not, then the Christian must explain how gang rape and cannibalism are somehow intrinsically worse than the butchering of infants and sexual enslavement of virgin girls who just watched their families slaughtered.

That brings me to the thing that I find frustrating about Seven Things. The book lays a solid foundation to recognize the full humanity of the text formed through history and to focus on its transformative purpose to conform us to Christ when read properly. And yet, it fails to follow out this framework to its radical conclusions which could allow for a decisive christocentric and cristotelic critique of moral perspectives within the text.

Granted, Seven Things is not perfect, but it remains an excellent overall introduction to the Bible, one that I would heartily endorse for interested laity and Bible college students. Indeed, I selected it for a monthly reading in my church reading group and we’re discussing it tonight!