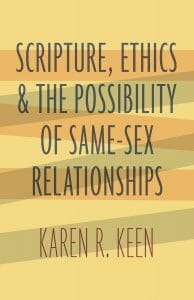 Jesus never talks about same-sex relationships, but he does talk about marriage (e.g. Matthew 19:1-10, Mark 10:1-12). And when he describes marriage, he always does so within the context of an indissoluble male/female covenantal bond. His understanding of the indissolubility aspect is an important topic in the conversation, But here I want to focus on another issue, one that goes to the heart of the dispute over the ethics of same-sex relationships and the ethics of Jesus.

Karen Keen is herself affirming of same-sex relationships and in her very fine book Scripture, Ethics, and the Possibility of Same-Sex Relationships she succinctly lays out the contrasting perspectives. She writes, “Traditionalists argue that Jesus’s reference to ‘male and female’ (Mark 10:6) is evidence that he is making a statement about sexual differentiation.” By contrast, “Progressives agree that male and female are part of God’s good creation, but they believe loyal, covenanted love, not sexual differentiation, is the foundation of biblical marriage.”

This is a big question, but in this brief article, I’m going to give a brief illustration in support of the claim that Jesus is indeed expressing the traditionalist perspective and thus that he is meaning to endorse both the monogamous covenantal bond and the expression of that bond in terms of a male/female relationship.

Here’s the illustration. Junior asks to borrow the car but his mom says, “Okay, but you need to wear your seatbelt!” Junior agrees and he leaves with his friend for a drive. But Junior does not put on his seatbelt and his friend comments: “Hey, you said you’d wear your seatbelt.” Junior replies, “Yes, but in fact, Mom only meant to endorse the more general principle to drive safely. Wearing a seatbelt is one expression of that general principle but there are others and so I can drive safely without wearing a seatbelt and thereby meet her general demand.”

It seems to me that Junior is mistaken here. To be sure, he is right to note that Mom’s request includes a tacit or assumed request to drive safely. But it seems quite clear that this general request for vehicular safety is also given a concrete expression in terms of wearing a seatbelt while he drives. And for Junior to insist that this additional specific request was never intended is to engage in special pleading.

By the same token, it seems most plausible to me that when Jesus speaks on marriage, he is not only affirming the background notion of a monogamous covenantal union but also the explicit expression of that covenantal union in terms of a male/female relationship and to believe otherwise is to adopt an implausibly strained interpretation of his words, one that is likewise subject to the charge of special pleading.

To be sure, I don’t claim that is by any means the final word and commentators like Keen have a lot more to say about the topic. But it does seem to me that this is, nonetheless, an apposite analogy and one that shows the implausibility of that reading of Jesus’ words.