This Reformation Day, in honor of Luther’s 95 Theses I present 9.5 Theses for Christian apologetics. Okay, it’s actually 10 theses, but the 10th one is really short. 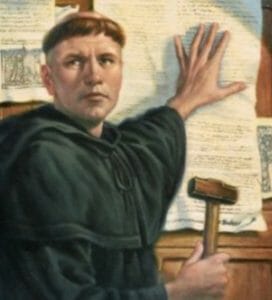 2. Be careful about making extraordinarily difficult commands about adiaphora (i.e. non-essentials). The foundation of Christianity is not a particular view of Genesis or the history of Israel. Rather, as the creeds testify, it is the Son of God who became human, died an atoning death for a fallen creation, was raised, and is coming again. Keep the main thing the main thing.

3. Be wary of Christians who adopt indefensible binaries of truth vs. error which lead them to think erroneously that they have nothing to learn from others. You can gain great insights from a Christian theologian, a Buddhist monk, or an atheist philosopher. All truth is God’s truth, and that truth can be found in all sorts of places.

4. When apologetics is simply about persuading people of what you currently believe, it is in danger of becoming propaganda. Always keep the search for truth primary within the apologetic enterprise and seek to do apologetics in such a way that it is as likely to highlight the areas where you are wrong as the ones where you are right.

5. Apologetics requires a sound foundation in theological and hermeneutical understanding. Without that foundation, it will be like a house built on sand.

6. Beware of tying your apologetics to partisan socio-political squabbles. Issues like abortion, climate change, gay marriage, and trans-rights are all important topics of debate, but the minute you tie your entire apologetic to one or another stance, you run the risk of alienating a significant audience and distracting from the main message of mere Christianity. To be sure, it’s not that this should never be done, but always count the cost before you do.

7. Too many apologists get into the game simply because they like to argue, and especially to win arguments, and maybe even to build a ministry that can give them a platform to spend their days arguing and winning arguments. Be wary of the stinging indictment of Qoheleth, “All is vanity.” (Ecclesiastes 1)

9. Your job is not to win anybody over to your point of view. Rather, your job is to be faithful to the call to always be ready to share the reason for the hope within and to do so with gentleness and respect. The Holy Spirit will take it from there.