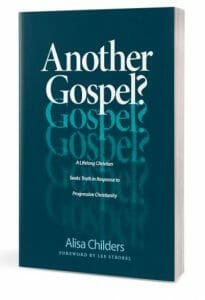 To Lee Strobel and Sean McDowell,

I am writing to you concerning your endorsements of Alisa Childers’ book Another Gospel?  Mr. McDowell, you referred to the book as “a timely must-read book.” And Mr. Strobel, you actually wrote the forward to the book and you claim that Childers “fearlessly confronts the distortions and outright falsehoods that fuel so much of progressive theology.”

On the contrary, having read her book carefully it is quite clear that Another Gospel? is, in fact, a text which is itself full of distortions and outright falsehoods. And I would like to ask you about two claims that Childers makes, in particular, claims that are at the very heart of the book.

My First Concern and Question

Childers claims in this passage, not just that so-called “progressive Christians” are Christians who are in error/unorthodox in some particular doctrine. Rather, she states clearly that she believes they represent, as she puts it, an entirely different religion just as Mormonism or Islam would represent entirely different religions. Childers identifies several people as being part of this non-Christian religion she calls “progressive Christianity,” including Peter Enns, Nadia Bolz-Weber, Richard Rohr, Brian McLaren, Rob Bell, William Paul Young, Rachel Held Evans, and Brian Zahnd. Interestingly, I just spoke with Brian Zahnd about this and he does not refer to himself as a “progressive Christian” at all. He understands himself to be, rather, a “small ‘o’ orthodox Christian”.

My Second Concern and Question

At the end of the book, Childers claims that a person must accept the following eight doctrines in order to be saved. She writes:

“Today we have God’s final revelation, and Geisler concluded that, according to the New Testament, the essentials one must believe (at least implicitly) in order to be saved are

Infants do not believe these doctrines, not even “implicitly”. So it follows that according to Childers’ view, infants who die in infancy go to hell. So does a twelve-year-old Jewish girl who dies in Auschwitz. So does every person who rejects proposition 8 in favor of a Christian inclusivism (or even hopeful inclusivism). No doubt, by this metric, Childers also believes that adherents to that non-Christian religion she calls Progressive Christianity, people like Peter Enns, Richard Rohr, and Brian Zahnd, are also going to hell where they will suffer eternal punishment, being tortured day and night forever.

Do you believe that as well? If so, what is your argument for the claim that these eight doctrines must be assented to or a person will be tortured forever in hell? If no, why did you endorse the book?

Thank you for taking the time to read my open letter. I look forward to hearing from you in this matter.