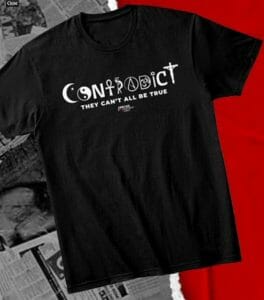 The other day, I posted the following tweet criticizing a t-shirt being marketed by evangelical apologist Frank Turek:

“Frank Turek is selling a shirt that replaces the “Coexist” logo with one that says “Contradict” as if belief in the truth of Xianity entails that all the claims of other religions are false. That is wrong. If you only look for disagreement you’ll never find the truth in others.”

I would have thought this to be a rather uncontroversial point: before you look for contradiction, find the concord. Build some bridges before you burn anything. That’s precisely what Paul did in Mars Hill in Acts 17. He began by affirming the altar to the unknown god and quoting from Stoic philosophers before he turned to concepts they did not accept: resurrection and judgment.

Paul provides an invaluable template for us as well: when you speak with others, begin with the point of contact: find that which you can affirm in the view of the other person. Once you have their interest, you can then move on to the points of disagreement.

Needless to say, choosing to frame your opening salvo toward all other religions with the single word “contradict” is an intentional act to frame interactions with your neighbor in terms of disagreement. To be sure, disagreement exists, as Paul illustrates at Mars Hill. But he didn’t begin there and neither should we.

The defender of the shirt will object to my analysis. And they certainly did on Twitter. You see, from their perspective, the issue is about “objective truth” and if we recognize such objective truth then we need to highlight that we disagree with others.

Well sure, but Paul recognized objective truth, too. That didn’t stop him from beginning with agreement in matters of objective truth before turning to disagreement.

Alas, the Turek supporter still looks unhappy: “You don’t get it! The shirt is a response to that ‘Coexist’ logo that endorses religious pluralism.” 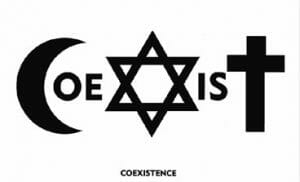 But wait, who said the Coexist logo endorses pluralism? Open a dictionary and you will read that “coexist” means “to exist together at the same time” or “to exist separately or independently but peaceably, often while remaining rivals or adversaries.” (source) Neither definition makes any claim about truth, as such.

In fact, the original Coexist logo (pictured to your right) was designed in the year 2000 by Piotr Mlodozeniec to teach religious toleration: i.e. the second definition of peaceful coexistence while remaining adversaries. The sad reality is that evangelicals are often so pugilistic, so combative, so amped up looking for disagreement that they completely miss a message that they should endorse. After all, they surely are not meaning to endorse a strict evangelical version of Sharia law, are they? They do at least think they should tolerate dissenting perspectives, don’t they? I sure hope they do.

There is a lesson here. As Maslow famously said, to the man with a hammer, everything looks like a nail. If you want to go through life finding disagreement, disagreement you will find. But that narrow, combative approach to reality is likely to miss all the points of agreement you share with others. Truth emerges not merely when you say “No, not that!” but also when you say “Yes, I agree!” How sad that so many evangelicals seem to have forgotten that.