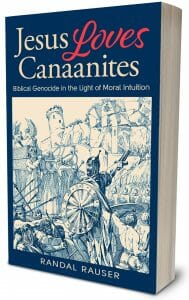 My latest book Jesus Loves Canaanites has been out for a month now. Overall, the response has been excellent, but I’ve heard a handful of criticisms from readers. Most of those are, frankly, misfires. But in this article, I am going to consider a more substantive objection which I have heard a few times, one that pertains to the alleged limited socio-historical horizons of my ethical argument.

Let’s begin with a quick overview of a couple of points from the book. First, I argue that we can grasp through moral reflection the intrinsic evil of actions of genocide, particularly in its most extreme form, that of the targeted mass killing of members of the target group. What is more, properly functioning human agents (i.e. those without a psychopathic personality disorder) can grasp these basic moral values and obligations through their immediate moral intuition. Like a flashing red light, moral intuition warns us off from committing moral actions that we recognize to be heinous.

Consequently, if we choose to ignore that flashing red light, and we instead opt to become complicit in the dehumanization and slaughter of another population, we will experience a deleterious effect on our psychological, spiritual, and emotional well-being. As I argue in the book, it is common for genocidaires to dehumanize the target population by way of actions like torture, mutilation, and rape. While these heinous actions of dehumanization make it easier to kill in the short term, the long-term impact on the population of genocidaires is devastating. When it comes to the ancient Israelites in Canaan, this yields a deeply ironic situation in which the very genocidal actions ostensibly undertaken to protect the spiritual purity of the Israelites end up becoming the very catalysts for the moral corruption of the Israelites.

That’s a quick summary of one line of argument in the book. And that brings me to the rebuttal that I’ve encountered from some readers. While I’ve heard it a few times now, the basic gist goes like this:

“Wait a minute, Rauser. Aren’t you naively projecting your modern values onto the ancient near east? After all, standards of warfare were different at that time and life was ‘nasty, brutish, and short.’ So we have good reason to believe that the Israelites would not have been emotionally disturbed by participation in the slaughter in the same way we would be today. And that means that they wouldn’t have needed to commit further acts of dehumanization of the victims to cope with the psychological stress, because they wouldn’t be stressed in the first place. In short, the Israelites could carry out their orders without all the negative effects that you describe.”

That’s the objection. So is it a good one?

Let’s concede, for the sake of argument, that the ancient near east was so brutish that the Israelites had been turned into callous killing machines that could slaughter Canaanite infants, small children, the mentally and physically handicapped, and the elderly, and they could do it all with complete disregard for the cries and groans and the desperate struggle to live of their victims. Fine, but how is that an improvement? To put it bluntly, this argument reduces to the claim that the Israelites could not be brutalized by the genocide because they were already hardened killing machines who looked upon their victims with the same dull detachment and callous disregard as a great white shark sinking its jaws into a desperate seal.

This is not a good argument. To put it bluntly, that objection is like arguing that you can prevent the loss of any fingers in the lawnmower if you preemptively amputate your fingers before you start cutting the grass. Likewise, you can prevent the psychological damage of complicity in genocide if you start by effectively “amputating” the moral sensibilities that render such an action unthinkable in the first place. If anything, objections like that merely underscore the strength of my analysis.